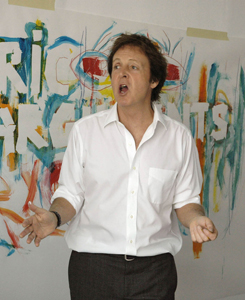 It’s McCartney, the Killers and the Cure for Coachella.

The headliners for the Coachella Valley Music & Arts Festival 2009 will be Paul McCartney Friday, April 17, the Killers on the 18th and the Cure on the 19th.

Other big names on the bill include Morrissey, Franz Ferdinand, Leonard Cohen, Conor Oberst and the Mystic Valley Band and Beirut on the 17th; Amy Winehouse, Thievery Corporation, TV on the Radio, Band of Horses and Fleet Foxes on the 18th; My Bloody Valentine, Yeah Yeah Yeahs, Throbbing Gristle, Lupe Fiasco and Paul Weller on the 19th.

Tickets are on sale now, and you can view the (still developing) list of performers and get all the other info you need about the festival at coachella.com.

Earn it Yourself (A Spot on Warped Tour!)

Bands are being offered a chance to perform on the Kevin Says Stage on this year’s Warped Tour through a competition called Earn it Yourself.

One band in each region that the tour stops in will be handpicked by the tour staff. They’ll be looking for the hardest-working independent band in each area that’s “successfully building their career from the ground up through dedication to their craft.”

Applicants need to create a profile at earnityourself.com in order to make a submission. The site is also launching a weekly online radio show to promote the showcasing bands; it’ll air live every Monday night.

Need a last minute Valentine’s Day gift for your music-loving sweetie? Legacy Records may have just what you’re looking for in the form of the first nine titles in their new From the Heart series.

The series is a set of love songs from artists like Babyface, Air Supply, Aretha Franklin and the king of old school seduction, Frank Sinatra. Each collection is packed with mellow, tried-and-true bedroom songs, and collectors will find a couple of surprises among the setlists. Air Supply’s entry includes the previously unreleased “Miracles,” and the Miles Davis collection features a rare live version of “My Funny Valentine.”

Other artists represented in the first flight of releases are the Isley Brothers, Billie Holiday, Dolly Parton and Etta James. The From the Heart series is available digitally and on CD.

Veteran metal band Iron Maiden has a feature length documentary film coming to theaters soon; Flight 666 is scheduled to touch down in cinemas worldwide April 21. The film was shot about a year ago during the first leg of the band’s massive Somewhere Back in Time World Tour that had them playing to almost half a million fans in 13 countries.

The film will be shown in High Definition with 5.1 surround sound, and a list of participating theaters will be announced in the near future. Iron Maiden remains on tour but no U.S. gigs are scheduled at this time; the band is currently in Asia and stopping in New Zealand before spending most of March in South America. ironmaiden.com

John Forte, the Grammy-nominated singer who came to prominence through two solo releases and his work with the Fugees on their The Score album has been released from prison. Forte was sentenced to 14 years in federal prison on drug charges but was released after serving seven years when President Bush commuted his sentence late last year.

The artist has wasted no time getting back into the swing of things. He’s already released a new track, the appropriately titled “Homecoming” featuring guests Talib Kweli and Kanye West.