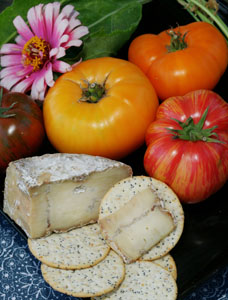 It’s easy to imagine Organic as healthy, fertile farmlands or tomatoes with little beads of water streaming down the sides. But Organic doesn’t just pertain to food – it’s a way of life for some, a habit for others and a style to millions more.

Just to clarify, organic is the raising of food without conventional pesticides that have been in use for the majority of the 20th century. In most cases it is an about-face from the large corporate farms, which produce a high quantity of product with a low grade of comparable quality. It is also the idealization of the hearth and product that a small farm can bring in.

In the beginning they all were Organic farmers, mostly they were subsistence farmers too. They were the rugged Americans that are idealized as spiritual forefathers. This was the 1800s, before large scale industrialization.

As the 19th became the 20th century Organic growers were those who resisted the urge to sell off their land to the corporate brands that have been ingrained in American consciousness. They were the antithesis to Campbell’s soup, Kraft Macaroni and Cheese, General Mills Cheerios and Coca-Cola. By the 1950’s corporate titans had marginalized these growers to the brink of extinction.

Organic survived. The last vestiges of American culture that would harbor the “organics” were, of course, the ’60s and ’70s counterculture. Hemp-loving commune farmers reintroduced the Organic way of life to a niche audience that survived the ’80s and ’90s and lasted until the age of An Inconvenient Truth.

By the time “Organic” (as a brand) was reintroduced in the popular culture it was already mainstream to “think green,” “conserve energy” or own a hybrid car. Organic food was ripe to become part of the American fiber again.

The Organic Supermarket. Nothing has fostered the rapid expansion of Organic than Whole Foods. What was once a small, health food grocery store now operates over 270 stores nationwide. It is the equivalent of making an Organic Costco, or perhaps more ambitiously, an Organic Wal-Mart.

It seems to be the genuine desire of the store and its employees to bring a consciousness to the concern of eating quality produce, meats, poultry and grain. Even if millions of American’s choose to disregard the Organic label (or perhaps can’t afford to buy it often) they now know without a doubt that they have a choice in buying different quality basic goods.

Maybe there is a collective romanticizing of the individuals who produced harvests from simple plots of land. Perhaps it’s just a simple craving for something real – an apple grown without chemical intrusion, a couple potatoes that haven’t been sprayed with pesticide, a plant untouched by mechanics or technology.