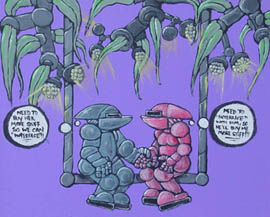 It’s an irony probably not lost on Poor Al – who claims his most potent inspiration is the animatronic animals and plants of Disneyland – that his paintings sell for less than the cost of a two-person family visiting Disney for a day.

Perhaps this is why Poor Al’s paintings are as transparent as Michael Eisner’s sh*t-eating grin.

Yet, there’s something refreshing in the obvious criticism Poor Al makes with the robots of Earth-Mart in his Magical Mechanical Garden. While some artists feel the need to abstract their symbols to the point where no one but the artist grasps their works’ meaning (I’m looking at you, Matthew Barney), here you have an artist whose criticism is overt and easily understandable.

Earth-Mart? Come on. Or as the artist himself says, "The robots of Earth-Mart fall in love, perform yoga, and build flowers in the garden, but they fail to grasp all of the spiritual elements of a real garden. The Magical Mechanical Garden is also a commentary on the lack of patience most of society exhibits these days. People want the beauty of a garden, but they aren’t willing to work and wait as long as it takes to grow a real one."

So instead, I guess, we buy paintings of gardens instead of painting ourselves – ooh. Check and mate. Where’s your Messiah, now, Poor Al?

The paintings are an amalgamation of The Animatrix and, I don’t know, "Metroid" – and, with their accompanying text, the exhibit reads as a Lonely Planet Guide to the Magical Mechanical Garden: "This is a close-up of an "Electro-Bee" in the garden. #5 has flight issues in his programming and routinely loses formation with the other bees. The garden keepers (programmers) call him ‘special,’ but really he’s broken."

The Magic, unlike Walt’s animatronics, is real – leaving the exhibit, one does feel like they have spent the afternoon in a garden full of wonderful creatures.

Art
Homeless artist wants to ‘be the light’ on LA’s skid row
1,323 views

Art
Muralist Robert Vargas is painting a towering history of LA above the traffic
5,193 views