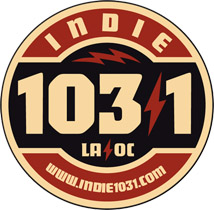 Jan. 15th was a sad day in radio history, as Indie 103.1 announced that they would be leaving the airwaves. I was personally traumatized, since my iPod-stereo adaptor was stolen, I can’t afford to buy a new one, and every other radio station sucks. This will significantly alter the quality of my driving experience.

Yes, there’s still KXLU and KCRW, which have some awesome programs, but they are never as consistent as Indie was. And yes, Indie was not all that ‘indie,’ but at least they were trying and offered a hell of a better alternative to any other station in Los Angeles, or anywhere else for that matter.

Not only do I mourn the loss of prime car jam sessions, but I also mourn the loss of one of my top sources of exposure to new music. I picked up many of my current flavas of the week on Indie, and that’s what they were best for – those jams that you want to hear every time you’re in the car to get you pumped up and jazzed about life – Santogold, MGMT, Cold War Kids, etc.

Not to mention a healthy dose of indie classics like Iggy and the Stooges, Interpol, the Beastie Boys, Costello, etc. Sure, they could have played more Dylan and Waits, more Animal Collective and Björk, or more of that hardcore-rebel-give-it-to-the-man stuff they decided to play when they knew they were peacing out, but I appreciate that they were there at all.

A newer, probably better version of Indie is now available only on the Internet, indie1031.com, but that does nothing for my need for traffic-induced stress-releasing tunes.

The station’s demise is due to “the way audiences are measured.” Basically, last fall Arbitron instituted a new policy of portable people meters instead of diaries as rating devices and Indie got screwed because an even smaller percentage of their discreet yet devoted audience was measureable.

Santa Monica-based chain owner, Entravision Communications, admitted that Indie was forced “to play the corporate radio game” and that the station’s broadcasts in recent months were a dumbed-down version of the former Indie, which explains the KROQ-esque ’90s hits on rotation. The higher-ups at Indie made a good call and decided not to play that corporate game any longer and cut the cord altogether.

Better to go out on top, despite having to lay off numerous employees and alienate some loyal Angeleno fans. At least we can remember them in their prime.

Tune into 103.1 now and you’ll hear the Spanish language channel “El Gato.” Indie left on a high note though, playing Frank Sinatra’s “My Way” before making the surprising announcement and airing a pre-recorded mission statement of sorts for the next two days.

That’s all we got; two days and Indie was ripped from the radio airwaves, just like that. It’s still my No. 1 preset, but now I use it as a touchstone for scanning and getting to other stations I previously ignored. It was bitter sweet to hear them play Black Flag’s “Jealous Again,” Sex Pistols’ “Anarchy in the USA” and Sid Vicious’ “My Way” those last two days; the potential for good music on the radio was there, but the outlet was now defunct.

Indie was a grassroots endeavor, started by two guys over Christmas break with $2,500 worth of Amoeba Records material. They were given complete control at first, even though they were run by Entravision and Clear Channel Communications. That’s how punk, new wave and “Jonesy’s Jukebox” came to grace the airwaves. Let’s remember that, and maintain hope that independent radio can and will exist.