THE PITCHFORK 500: Our Guide to the Greatest Songs from Punk to the Present 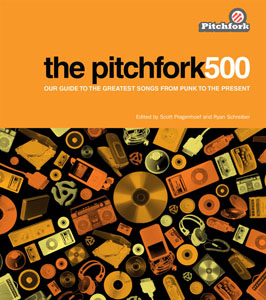 Any opinion can be written about music – the form is so fluid, so subjective and so interpretive that it begs to be explained with a variety of conflicting opinions. More difficult than reviewing music or postulating about acclaimed bands is creating a chronology – a musical story arc or a cohesive narrative that helps explain the evolution of music.

Begun in 1995 by the 19-year-old Ryan Schreiber, pitchforkmedia.com has become an online haven for music consumers and hipsters looking to find and explore new underground/independent music. The site has been acclaimed for writing lengthy and literate music reviews and shining a spotlight on indie/alternative/unconventional artists.

Schreiber attempts to trace the arc of alternative music starting with David Bowie’s “Heroes” and ending with Burial’s “Archangel” in the new book, The Pitchfork 500. Beginning in 1977, the year that punk became mainstream, the book compiles 500 influential tracks from underground and established rock, alternative, electronic, dub, hyphy, avant-garde and noise musicians that have pushed the creative boundaries and won critical praise.

The book is divided into nine chapters that chronicle music from 1977-2007. Each chapter comments on a smattering of musical genres that achieved notoriety or flew under the radar during the era.

Each single is treated with an elaborate review attempting to define the artist, place, time and mood of the piece. Encapsulating rousing 1980’s angst is Journey’s “Don’t Stop Believin’” and Dead Kennedy’s “Holiday in Cambodia.” Modest Mouse’s “3rd Planet” and the Postal Service’s “Such Great Heights” are included to illustrate the synergy between the modern music landscape and corporate branding.

While there are thousands of music guides, The Pitchfork 500 is unique in that it connects the dots between experimental artists and their more Billboard-friendly peers. The influence of both popular musicians and underground artists has reshaped the modern music scene and contributed to the proliferation of new artists and eclectic styles.

The Pitchfork 500 is currently available.