SEEING THE STARS: After the Break 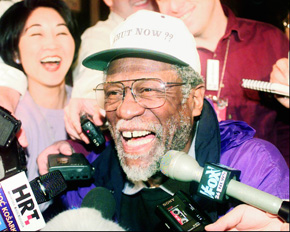 Both L.A. teams were represented at the 2009 NBA All-Star Weekend in Phoenix. A blowout performance by the Western Conference stars over the East’s resulted in Kobe Bryant sharing MVP honors with his former Lakers teammate Shaquille O’Neal. Bryant’s 27 points and four assists led the squad to a 146-119 victory.

Additionally, Lakers guard Derek Fischer participated in the Shooting Stars competition with Lisa Leslie of the L.A. Sparks and Lakers legend Michael Cooper. And both Clippers in the Rookie Challenge scored in the double digits: rookie guard Eric Gordon had 19 points, while sophomore forward Al Thornton put up 10.

In the most emotional moment of the weekend’s festivities, NBA Commissioner David Stern announced that the annual finals MVP award would henceforth be named after the esteemed Boston Celtic Bill Russell. Last year’s MVP, Bryant, and the rest of the Lakers are still the top team in the west at 42-10, but there are still a lot of tough games ahead.

Meanwhile, the 13-40 Clippers spent All-Star Weekend smiling about their Feb. 11 128-124 overtime win against the 21-31 Knicks at Staples. The Clips outscored New York 18-14 in overtime, Gordon scored 30 points, forward Steve Novak put up a career-high 23 points off the bench and guard Baron Davis made a career-high 20 assists (in addition to his 13 points).

PLAYER OF THE WEEK: ERIC GORDON

January’s Western Conference Rookie of the Month takes this week’s honors for his 30 points against New York and 19 points in the All-Star Rookie Challenge. Gordon has a lot to prove and has the smarts and finesse to help his franchise gain the momentum it desperately needs.