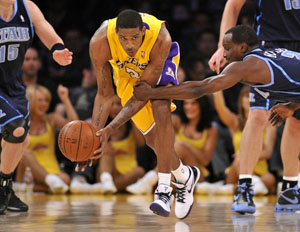 Twenty-three-year-old Trevor Ariza has finally found his niche in the NBA, in the city where he grew up, as part of the Los Angeles Lakers. Ariza, in his fourth season as a pro, is averaging 8.7 points, 4.7 rebounds and 1.9 steals in 23.9 minutes of play per game.

The addition of Ariza’s speed and athleticism to the Lakers last season energized the entire squad. He pinpoints the time when he really began to feel accepted by fans as “preseason this year, my game started to open up and people started to recognize that what I do does help my team and can change the game a little bit.”

Ariza relishes his role in the Lakers’ second unit.

“Honestly, I don’t think that starting really matters. I believe whoever’s in the game at the end of the game is what really counts. I just like coming off the bench. I get to see how the game’s being played and try to change the game a little bit,” he says.

Change the game has become a motto for the player and is a term he coined with teammate Lamar Odom.

“We were down one game, and he [Odom] looked at me and said, ‘If we want to win this, we’ve got to change the game. We’ve got to do something to make stuff happen.’ We went in and did that, and from then on it’s been our thing: Change the Game,” recounts Ariza.

Change has always been a part of life that Ariza embraced. Born in Miami, his family moved to Westchester, Calif. in 1996. He started playing league ball when he was 11-years-old at Westchester Park.

While at Westchester High, he made one of the most important decisions of his life.

He recalls, “Once my high school coach told me that I could either play football or basketball, I chose to play basketball. I saw how hard they was hittin’ the players on the football field, and they were all bigger, so I was like, ‘yeah, you know what? Basketball is probably the best way to go.’ I was skinny, I didn’t want to get broken up! I still love football though.” (His favorite team: the Raiders.)

Growing up in Los Angeles, Ariza discovered some great parks to ball at, including his future university.

He reveals, “I used to go up to UCLA a lot to play pick-up games.”

Ariza eventually enrolled at UCLA in 2003, where he earned All-Pac-10 Freshman Team honors, had three 20-plus scoring games and three double-doubles in his lone season as a Bruin.

In 2004, he was drafted to the Knicks as the 43rd overall pick, making him the youngest player (and the first teenager) to ever play for New York. He played 80 games (1,382 total minutes), 12 as a starter, the most by any Knick rookie.

The following season, he was traded to Orlando where he averaged 8.9 points, 4.4 rebounds and one steal in 22.4 minutes per game. Ariza also saw his first playoff action when the Magic faced Detroit in the east semifinals.

Of his time with the Knicks and Magic, Ariza says: “On those teams, I never really got the chance to play or show what I could do. It was just a preview.”

Then Nov. 20, 2007, Ariza came to Los Angeles in exchange for Brian Cook and Maurice Evans.

He says, “I really didn’t know what to expect coming to a new team, getting traded for guys that had been here their whole career. I’m sure other guys weren’t too happy about losing a teammate, but once I got here everybody accepted me and welcomed me. … The transition was really quick ’cause they’re good guys, and they like that I’m playing.”

Although he fractured a bone in his right foot in January 2008 and was sidelined four months, he was able to return for the Western Conference Finals against San Antonio and even scored a basket in his first minute. His transition into the team not only has to do with his finesse with the ball, but that he’s just as integral to the team on defense.

Nowadays, the six-foot, eight-inch Laker has settled back into his childhood hometown. When he’s not on the court, he enjoys “chilling at home, playing with my son and taking him to the park,” and he’s still a fan of the game.

“I used to like watching James White dunk. He went to Florida. YouTube James White, and see how he flies. He really can dunk. I like watching Dwight [Howard] dunk, Rudy Gay, Kobe every once in a while when he pulls out something,” he says.

Even though it’s only February, this year’s playoffs are on the horizon for the No. 1 team in the west. But only time will tell what the postseason has in store for Trevor Ariza and the Lakers.