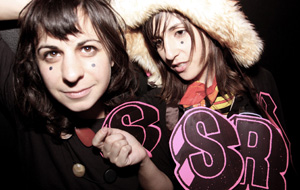 Greif-Neill: What’s so good about T.S. Eliot? Why’d you bring him up?

Nite Jewel: My teacher brought him up in comparison to collagists, contemporaries of his. I like the way he creates a world without the authoritative voice of the poet, instead with a group of voices. He’s scatterbrained.

People try to make weird comparisons with you. Somebody recently, in reference to you, brought up Miss Kitten. What do you think you have in common with her?

I think they were trying to say that both Miss Kitten and I were artists whose music you could dance to, but whose music also has a distinct melancholic quality. Other than that, I don’t think we have anything in common.

Who could you compare yourself to, then, just completely overall?

Yeah, I saw the documentary.

Even in looks, then, Bruce Haack?

If you could be of another ethnic origin, what would it be?

Like Miss Kitten. Obviously you envy her. What about, if you were an EU nation, who would you be?

Germany, because they have the right combination of self-esteem and self-doubt.

Can you explain to me what MIDI does?

It makes it so you can play with superhuman speed and accuracy.

OK, thanks. What other bands do you play in or have you played in?

I play in a band with Julia Holter called Nite Jewel & Julia Holter. I am also the full-time whistler for Haunted Graffiti.

Fine. I was in Klezkidz. I was also in the Oakland Interfaith Youth Gospel Choir and the Berkeley Jazz School Vocal Jazz Ensemble. Also, the jazz combo at Columbia, but I called in sick to the recital because my boyfriend was in town.

What dances can you do to your music?

You can do the Baby Dance for Baby Hands. It’s for people like myself and my bandmate Emily who have baby hands. You stick your hands up and then rock back and forth on your knees until you’re lower and lower and then you sort of scoot back up again. Then repeat.

What are your new songs all about?

I have an EP of new songs coming out on Italians Do It Better probably in April. The A-Side is called “Want You Back,” and the B-Side is called “All Out Of Order.” There’s also a Spanish version of “All Out Of Order.” I’m trying to write songs that are more linear ... I feel like most people with a grasp of basic pop songwriting basically write in a circular pattern that just loops back on itself.

What’s better about songs that are written linearly?

Nite Jewel’s Good Evening will be available March 17. They will perform Feb. 28 at Occidental College. For more information, visit myspace.com/nitejewel.