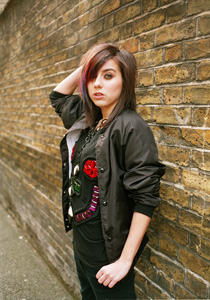 Lamb of God Escapes the Plague!

Lamb of God is about to release a new album called Wrath, and the first 100,000 copies of the CD will have a special insert that’ll put the purchaser in the running for some very cool prizes. It’s called the Escape the Plague contest and all the fan has to do to enter is go to the LOG Web site listed on the insert card and enter the card’s unique code.

The site will randomly select a hundred winners who’ll be able to select prizes like a trip for two to see LOG perform in the U.K., guitars or guitar lessons from band members, golden laminate passes that are good for entry to any LOG show for a year or a chance to be a roadie for a day when the band comes to town. One winner will have singer Randy Blythe come to their home and throw a barbecue party!

Wrath drops Feb. 24, and the contest Web site will go active then as well.

A year or so ago if you heard anything about Lady Sovereign in the news it was probably about the incident where she threw a drink on a guy dressed as a donut or about her confession of having money problems. Things have turned around considerably for the diminutive rapper, and since she’s put the pieces of her life back together what better name for her upcoming release than Jigsaw?

“I feel great now,” says Lady Sov. “I feel like I’ve overcome my dark times. I get to pick who I want to work with. No one can tell me off or make me do things because I’m the boss. I’ve got my own label, and everything works my way.”

The label that Sov is referring to is Midget Records, and they’ll release Jigsaw through EMI April 7. “So Human,” the album’s first single, is available digitally now.

If you know how L.A. band Carbon 9 got their name then you have an idea of what their musical philosophy is all about. So here you go: “Carbon is the basis of all organic life on planet Earth. Nine is the highest single digit known to mankind.” Therefore, “Carbon 9 is to live your life at the highest possible level.”

That highest possible level thing has made Carbon 9 the latest group to get the “hardest working band in L.A.” tag and the guys are anxious to prove it, chomping at the bit waiting for the release of The Bull, their new one for World Sound Music. Carbon 9 plays hard rock with a significant electro component and most of The Bull is original, but their style is also a good fit for the one cover song on the album, a scathing take on Danzig’s “Mother.”

The Bull will be available digitally Feb. 24 and hit brick and mortars March 10.

Are you ready for a little pre-St. Patty’s Day warm-up? Irish troubadours the Guggenheim Grotto are coming to the Hotel Café Feb. 25, and they’ll be showcasing music from their latest album, Happy the Man. The duo (Kevin May and Mick Lynch) has let it be known that they’re traveling light and looking for fan hospitality on this tour. So if you go to the show and you have some extra sleeping space available in your home, let the guys know.