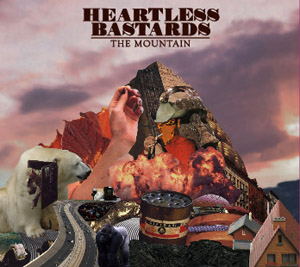 You’ll never be able to accuse Heartless Bastards of not having their own sound. They have it – in spades – in the form of singer Erika Wennerstrom. The remaining Bastards may play music that sounds familiar, like on “The Mountain” where the influence is clearly early Neil Young, but the minute Wennerstrom opens her mouth the song takes on a whole other dimension.

Wennerstrom has a sort of unisex voice; you may not realize at first that this is not a man singing. Then she has a very unique inflection; on “The Mountain” she phrases like a female version of Morrissey, and on “Be So Happy” she conjures up the ghost of a pixie-rockin’ (pre-glam) Marc Bolan of T. Rex.

Wennerstrom also puts her quirky warble to work on a few blues-based rockers, some quiet folk and a mystical number influenced by Led Zeppelin called “Witchy Poo.” Enjoying this music calls for an acquired taste; many listeners will not be able to take much of Wennerstrom’s style while others will hang on every note.

The Mountain is currently available.