Amon Amarth: Versus the World 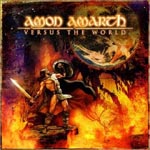 Amon Amarth is another name for Mount Doom in "The Lord of the Rings," and the fact that these five Swedish throwbacks know that is proof positive that there’s not much to do in Sweden. After all, when you’re a Viking and it’s no longer 1050 AD, what do you do? These guys started a death metal band, and not a bad one at that. Eschewing the brutality of their peers, they prefer a more surgical approach: sure, the women still get raped and the villages pillaged, but they’re kind enough to merely stab you in the back instead of chopping open your head with an axe. The songs are epic tales of Norse gods and bloody battles and victory over adversary; too bad you can’t understand the vocals. Of course, what these modern-day Norsemen are really pillaging are riffs from In Flames and Iron Maiden, but Sweden and England are easy to steal from, even though I thought Vikings didn’t steal from other Vikings. But what do I know? For me, world history starts with Led Zeppelin I.

On the cover, a warrior points a sword at a giant globe, so maybe these guys are the Swedish Spinal Tap…but I doubt it. Grade: B