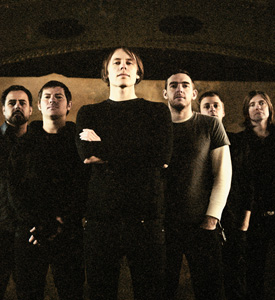 When a major label drops a band it’s oftentimes very hard to pick up the pieces and continue on. Numerous careers have been ruined by such experiences. Yet for New Jersey post-hardcore pioneers Thursday, who parted ways with Island Records in 2007, that turned out not to be the case.

“We definitely talked about splitting up because at some point it’s like you sold a gazillion records, you toured the world so many times, that there’s nothing new about being in a band anymore. It sort of all blends together in your mind,” vocalist Geoff Rickly says.

The band wrote the song “Subway Funeral” on the first night of jamming together and the tunes just kept on coming. What followed would be the band’s fifth studio album and arguably its best one yet – Common Existence.

“We wanted to sort of undercut some of the drama of our past releases by trying to put a lot of the subject matter of the individual songs into a context,” Rickly says. “There’s tragic comedies going on in people’s lives, and we’re no different.”

The title takes its name from the record’s closing track “You Were the Cancer,” specifically the line: “It’s a slip of the surgeon’s knife/In the darker crimes of common existence.”

“It’s a song about the flaw that there is in life that everybody has to say goodbye to the people they love the most. About that crack in the fabric of everyday life,” Rickly says.

“If you read [the lyrics] aloud and just took it as a poem without the music I think that’s the strongest thing I’ve ever written.”

While Rickly was stretching himself lyrically, producer Dave Fridmann, who helmed the band’s previous album A City by the Light Divided, was once again challenging the band’s sound.

“There’s no too crazy for Dave. You know what I mean?” Rickly admits. “He’ll just say these crazy simple statements about what is and isn’t working. ‘OK, I don’t want you to actually sing into the microphone for this one. I want you to go over there.’ You’re like, ‘OK, you’re worrying me.’”

The results varied from experimenting with running tape backwards at the end of “Time’s Arrow” to the 10-minute long “Stay True,” which didn’t make the final cut, but Rickly hopes will one day get released.

Thursday eventually found a new home with Epitaph Records owner and Bad Religion guitarist Brett Gurewitz, who was impressed with the group’s progression.

“To me that was a really cool sign because I think a lot of people would consider our earlier records to be more important,” Rickly notes.

“He thought that City was more interesting, which we had thought as we released it too, although I think this record is so much better than City.”

And so for a band that began in 1997 and is currently on its fourth record label, the journey continues.

“So when I look back on my 20s as like the golden days or whatever, I would have been in a touring band on the road for the entire length of that. It’s just weird to think about, you know?”