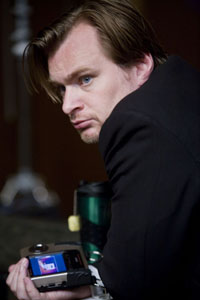 Christopher Nolan on the set of The Dark Knight
(Credit: Stephen Vaughan)

Today I have the pleasure of writing about one of my favorite directors, who is also one of the best directors working today. I’m speaking, of course, about Christopher Nolan, the man behind Batman Begins and The Dark Knight.

It has been announced that Nolan’s next film will be an original sci-fi action film titled Inception, and is already set up at Warner Bros. The only description of the plot is that it deals with the inner workings of the human mind. I’m sold already and would gladly pay double admission to see this film without even seeing a trailer.

Nolan’s feature film career has spanned 11 years and spawned six films, most of which are among my favorites. His second film, Memento, is one of my favorite films of all time, period. And as far as I’m concerned, The Dark Knight not only raised the bar on comic book films, it raised the bar on the entire action genre.

Not only did Nolan prove that you can make a big expensive action film with edgy writing and Oscar-worthy performances, he proved that you don’t have to play it safe to make a film that appeals to the collective mainstream. The bad guy wins, the hero throws his principles out the window, the character who represents hope is turned into a disfigured criminal, the love interest is murdered and the film carries a cynical message about heroism vs. terrorism, all without being didactic or preachy. For people who didn’t like The Dark Knight, the gas chamber is the only suitable place for you.

With the announcement of Inception, this means that it will be at least three years before we see another Batman film. If you’re upset about this I say, “relax.”

I think it’s good for a filmmaker to step away from a franchise and make another film in between installments. Who knows if The Dark Knight would’ve been as good if Nolan had gone right into it after Begins, instead of taking a break and making The Prestige. Would The Godfather: Part II have been as brilliant if Francis Ford Coppola hadn’t stepped away and made The Conversation in between?

Give it time to breathe, you know. Recharge. Generally, if a film is a hit, the studio immediately fast tracks the sequel into production in an attempt to cram more of the same stuff down the audience’s throat and capitalize on it. Fortunately, Warner Bros. knows that they’re dealing with a master filmmaker in Nolan and are letting him handle the series on his own terms. The Dark Knight will be hard to top, but if it’s possible, I believe Nolan can do it.

And while we’re on the subject of Christopher Nolan and The Dark Knight, I would like to take a moment to convey my unbridled rage that the film isn’t up for Best Film and Best Director in this year’s Academy Awards. I’m so enraged by this I’ve been seeing red since the nominations were announced.

I don’t know whether the Academy thinks it’ll be opening some kind of Pandora’s Box by allowing a film based on a comic book to be nominated, but I think this move displays a disconnect between the Academy and the mainstream who deserve to see their favorite films nominated. The only reason I’m not boycotting the Academy Awards completely is because Heath Ledger is nominated for his performance as the Joker, and I’m looking forward to seeing him win it. Whoever is responsible for this deserves to be spanked with a long ruler by a big angry nun on national television.