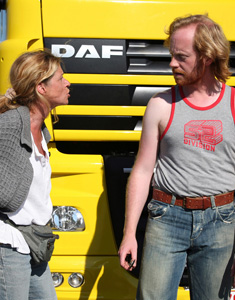 “Is this going to work? Me and you?” 29-year-old Johnny asks 41-year-old mother of three Matty in the back of his truck.

As another Valentine’s Day comes and goes, this question might be lingering on many lovers’ minds. Some pairs are extremely compatible. Other twosomes boggle anybody’s mind who sees them together. Johnny and Matty just might be one of the latter.

Moscow, Belgium opens on a dishelveled Matty shopping with her two young children, looking gloomier than miserable. Oblivious to life around her, she backs out of her spot in the supermarket’s parking lot into a truck – Johnny’s truck. A verbal battle ensues, and something about Matty’s feisty persona intrigues Johnny, who, when the cops show up, apparently is well known by the Ghent, Belgium police.

Matty leaves the scene of the accident only to arrive at the scene of another wreck, a.k.a. her home life. Her husband, Werner, is waiting to take the kids to his new residence, which he shares with his lover, a 22-year-old student of his (He’s an art teacher.).

Matty and her husband have been separated for a little over five months. He hasn’t filed for divorce, however, because he is confused.

And so begins the journey of Johnny chasing Matty, and Matty pining over her old (pre-affair) life with her husband. It’s an interesting situation Matty finds herself in, and actress Barbara Sarafian is incredible engaging, equal parts desperate and hopeless yet simmering with the potential to start a new life and be happy again.

Jurgen Delnaet as Johnny is also irresistibly likeable, though he treads lightly into stalker territory. Yet when Matty’s two male suitors are invited to dine at her house one night, you can’t help but feel like Matty is choosing between two downers, both of whom may not be good for her.

But you root for Matty. Regardless of what man sits at her table or shares her bed, you want her to be happy, and Johnny gives her glimpses at what joy might lie ahead. At the root of Moscow, Belgium is Matty’s quest to regain her strength, confidence and sanity back.

As Johnny notices, Matty uses mustard to kill the taste and smell of her food, extinguishing all senses from her life. He’s looking to change that.

Will it be in with the new (Johnny) or a return to the old (Werner)?