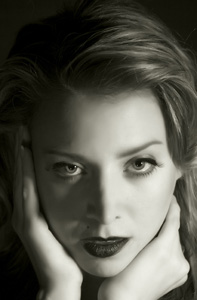 Stacey Oristano’s career has taken her full circle. Growing up in Dallas, Texas with an actor father and a mother who ran a daycare for foster children in their home, she understands Texas’ tradition of football as God, church and state, all rolled into one. But the former cheerleader says, inside, she has always been a “bohemian, artist, gypsy girl.”

As a child, she would sit backstage at her father’s plays and remembers falling in love with the lights, costumes and laughter coming from the audience. At 8-years-old she performed in the chorus of her first show and realized she found her calling. What she didn’t expect was where acting would take her.

“I was all set and ready to go to Texas Christian University which, when you’re a girl living in the Dallas-Fort Worth area, that’s what you do,” Oristano explains.

But an audition her senior year of high school landed her a spot at London’s Rose Bruford School of Speech and Drama, and suddenly she was off to Europe.

After graduation, Oristano moved to New York to pursue a career in theater only to get a call from Hollywood about a new show shot just hours from her childhood home, called “Friday Night Lights.”

“My agent called and asked if I wanted to go audition, and I was like [nonchalantly], ‘Oh, yeah, sure, why not,’ not thinking at all that I was going to get the part I was auditioning for … but I booked it!”

Originally she was only supposed to appear on one episode but her role as Mindy Collette has been steadily growing ever since. But, no matter how much success she achieves on the small screen, Oristano knows her roots.

“I’ll always be a theater baby,” she says.