MONICA RAYMUND: Sniffs Out the Truth on “Lie To Me” 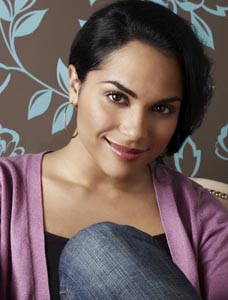 While most graduates are moving back into the family home with mom and dad, trying to figure out what in hell to do with that calligraphy-laded piece of parchment from their college or university, Monica Raymund is already making great strides in her profession. The actress landed the gig of all gigs on Fox’s new drama “Lie To Me” practically before the ink was even dry on her diploma.

“I went [to Julliard] for four years and upon graduating I was pretty lucky. I had a few options,” she says.

The most promising was the critically successful series, which partners her with British powerhouse, actor Tim Roth.

“When I heard he was going to be on the show,” says Raymund, “I’m not going to lie; I was so excited. He works in such a creative way.”

She revels in the advice given to her by Roth and thinks the world of his generosity as an actor. Her gratitude extends to the opportunity she’s been given to play a strong character that uses her intuition and logic to suss out the bad guys. Raymund’s Ria Torres is a former TSA agent plucked from a 9-to-5 gig and recruited into a firm that aids law enforcement in observing body language of criminal suspects.

“My character is just a natural based on her experiences with men and just experiences in general,” explains the actress.

So, how good is Raymund at detecting falsehoods in real life?

“Terrible,” she says, with a laugh. “I’m the most gullible person you’ll ever meet.”