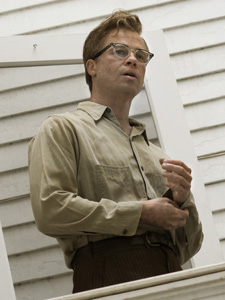 If this year’s Grammys were any indication of awards show comebacks, then after last year’s writers strike, the Oscars are due for a lot of love. Saturday will be a busy day for Academy Award nominees and with simultaneous crosstown appearances put on by both the Academy of Motion Picture Arts and Sciences and American Cinematheque, movie fans will have a hard time choosing where to warm up for the big event on Sunday.

At 10 a.m., the Egyptian Theatre is holding a seminar with the editors responsible for The Curious Case of Benjamin Button, The Dark Knight, Frost/Nixon, Milk and Slumdog Millionaire. Concurrently, nominated directors from Austria, France, Israel, Germany and Japan will be at the Samuel Goldwyn Theater in Beverly Hills for a symposium on their foreign language films.

Grab some lunch – or drive to the other location – because at 2:30 p.m., more possible award winners take to the chairs on stage. The Academy’s Makeup Artist and Hairstylist Symposium, also at the Samuel Goldwyn Theater, will feature the special make-up creator and applicator for The Curious Case of Benjamin Button, Heath Ledger’s make-up artist on The Dark Knight and several make-up artists for Hellboy II: The Golden Army.

Back at The Egyptian, the Art Directors Guild and Set Decorators Society of America is presenting a seminar with the art director nominees for Changeling, The Curious Case of Benjamin Button, The Dark Knight, The Duchess and Revolutionary Road.

These events will feature screenings of movie clips and once-in-a-lifetime discussions with some of the movie industry’s greatest creative minds and all four are free to the public (although the Academy ones are listed as “sold out,” there might be some tickets available at the door).