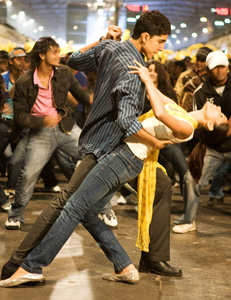 It won the Producers Guild Award, which is a very reliable predictor of Oscar success, to go along with its Golden Globe, BAFTA, Screen Actors Guild, et al. wins. Plus, it has momentum and a feel-good vibe that might endear it to voters in these uncertain economic times.

He won the Directors Guild Award, as well as a Golden Globe and a BAFTA. He’s a respected industry veteran who made a movie that almost didn’t get a theatrical release, so he has the underdog thing going for him, too.

That being said, I could see an upset in this category. Stephen Daldry, David Fincher and Gus Van Sant are all respected vets as well, and none of these four men have won an Oscar.

And whenever something has the momentum, there’s almost an inevitable backlash (see Brokeback Mountain’s stunning loss to Crash). Daldry also has Harvey Weinstein in his corner, which is a huge intangible (see the Shakespeare in Love upset over Saving Private Ryan).

She has already collected trophies from BAFTA, SAG and the Golden Globes for this role (though the latter two were for Supporting Actress). Plus, she’s a respected actress whose five previous losses at the Oscars might give her additional sympathy votes. Having Weinstein as your campaign manager never hurts either.

This is a toss-up between Penn and Mickey Rourke (The Wrestler). Rourke is a great comeback story in an industry that loves comebacks, and Penn is practically the male Meryl Streep of his generation.

Since my editors won’t let me hedge my bets, I’m going to go with Penn. He did win the SAG Award and could get votes from those who want to support Milk because of Prop 8.

Historically, this is the category that has had the most surprise winners, so all bets are off. I’m going to go with Cruz, however, since she just won a BAFTA, and Woody Allen films have a history of producing Best Supporting Actress Oscar winners.

This is about the closest thing to a sure bet you can get. If Ledger doesn’t get a posthumous Oscar for this role, I will run naked through the streets of Los Angeles.

He won the Writers Guild Award, which is a very reliable predictor of Oscar success, to go along with his Golden Globe, BAFTA et al. wins. No matter what happens in the Best Picture or Director races, Beaufoy gets another trophy this year.

He did win the WGA Award and could get votes from those who want to support Milk in the wake of the passage of Prop 8.

The 81 Annual Academy Awards will air Feb. 22 at 5 p.m. on ABC. For more information, visit oscars.org.