ALL GROWN UP?: Keshia Knight Pulliam Plays Prostitute in Madea Goes to Jail 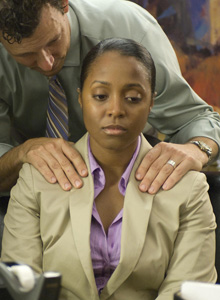 Most recognized for her role as Bill Cosby’s youngest and most adorable daughter Rudy Huxtable on “The Cosby Show,” Keshia Knight Pulliam is seemingly anxious to prove to fans that she’s all grown up.

In what she coins as her most challenging role to date, the actress plays Candace Washington, a prostitute and former drug addict in the onscreen version of the Tyler Perry-directed comedic flick Madea Goes to Jail.

“For me, it was the biggest stretch and hardest I have had to work at a character in a role, and that’s really why I took it because I wanted that challenge,” claims the actress who stars opposite Derek Luke, Sofia Vergara and Academy Award nominee Viola Davis.

“What’s so exciting about this role is getting the chance to play something that’s so different from anything I have ever done. People would never expect me to play a role of this nature – a heroine-addicted prostitute – and I hope I do it justice,” says Pulliam.

Pulliam who began working in the entertainment industry at 9 months old, became the youngest actress ever to be nominated for an Emmy Award when she was just 6 years old and has since earned a slew of other awards including a People’s Choice and an NAACP Image Award. One of the few child actresses who has managed to avoid controversy despite a six-page sexy lingerie layout in a men’s magazine, Pulliam holds a Bachelor of Arts degree in sociology from Spelman College and studied film at NYU.

Although the Atlanta resident who plays Miranda on the television show “House of Payne” has previously worked with Perry, she had never met the outspoken pistol-packing matriarch Madea – Perry in drag – who was first introduced to audiences in the 2005 flick Diary of a Mad Black Woman.

“Everyone else had worked with Tyler previously and had seen Madea and even though I had worked with him I had never met Madea. So I came onto do my scene and when I heard Tyler talking, I went round the corner and he was dressed as Madea and I screamed. It was a shock and really caught me off guard,” says Pulliam.

To prepare for her role as the troubled young prostitute Candace, she spoke to several individuals who had issues with drug abuse, but cites Perry as a great help in preparing her for the part.

“Tyler really did help me a lot along the way to just connect real life experiences,” says Pulliam, who had to adapt to Perry’s frequent on-set habit of ad-libbing lines.

“He flies off the script, and his mind works incredibly fast, so you always have to be prepared because you never know where he will take you.”

With an eclectic cast, which includes talk show host Dr. Phil McGraw, who Madea is referred to for anger management classes, Judge Mablean Ephraim and Judge Greg Mathis, Madea Goes to Jail is based on one of Perry’s most popular stage plays of the same name. It follows Madea’s incarceration after a run-in with the law, and as with all of Perry’s ensemble flicks, has a dramatic storyline, which reflects forgiveness and redemption.

“I took a risk,” claims Pulliam, who is also working on opening an actor’s resource center in Atlanta. “And I have learned that you have to. You have to step out of the box, and you can’t do things out of fear and should always trust your instincts.”