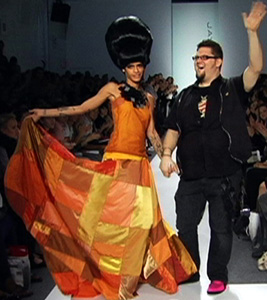 In the fashion world, 11 minutes on the runway is the usual set time to show a new collection or line.

“Project Runway” season one winner, Jay McCarroll gets his “11 minutes” of fame and glory in a documentary, capturing moment to moment experiences of the entire detailed process of putting together his fashion show at Bryant Park in NYC.

A grittier Unzipped (Isaac Mizrahi’s 1994 film), Eleven Minutes shows McCarroll’s creative, quirky, funky style, as well as a behind-the-scenes look at the business side of the fashion industry. Using a variety of cinematographic techniques and detailed camera shots, director/producers Michael Selditch and Rob Tate created a high quality, in depth look at McCarroll’s fashion show debut, his talent and originality, despite the many challenges and obstacles he faced.

His frenzied manner, range of emotions and dynamic energy paint a humorous realistic picture of a brilliant up-and-coming designer.

As his publicists, Nancy Kane and Kelly Cutrone state in the film, “Jay is an icon ... one of the greatest stars ever produced by reality TV.”

McCarroll himself acknowledges the difficulty and immense amount of hard work involved for an end result of 11 minutes, stating, “Anyone involved in any business is there for a reason … I’m in it, with something to prove – the pressure is on me to show a great line!”

McCarroll, Selditch and Tate were all on the same page in creating a film about the process, and what goes into it. Literally, the “fabric, fiber and texture is the soul of the film,” explains Selditch.

He points out, “Whether it be an actor, architect or fashion designer, I can totally relate to the struggle one goes through to finally achieve the end goal.”

Eleven Minutes accurately captures a vivid image of the innate stress and pressure lurking amid the seemingly calm coolness of the fashion biz’s glitz and glamour.