NICHOLAS D’AGOSTO: Gets Fired Up About His Latest Role 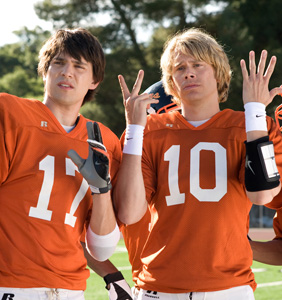 Nicholas D’Agosto has the range of actors three times his age. The dark-haired performer took a star-making turn as Ben – a latter-day Holden Caulfield – in the indie sleeper Rocket Science. He also became a household face, if not name, when he appeared as West Rosen on NBC’s “Heroes.” Now, D’Agosto’s cachet continues to rise as he tackles perhaps the most challenging rite of passage for any young actor in Hollywood today: the teen comedy.

Fired Up features D’Agosto along with his best buddy (played by Eric Christian Olsen) as a guy who suddenly tries out for the school’s cheerleading squad in order to cozy up to attractive girls.

“I play Shawn Colfax, and he’s the captain of his high school football team,” explains D’Agosto. “I’m a wide receiver. I’m a total stud. The movie is like a page by page of the Wedding Crashers.”

Stepping into the role of a cheer-tastic prankster looking to score at first seems like a stretch for the actor, until he explains the things that intrigued him most about his character.

“Shawn is like, the sweeter one of the two,” he says. “He’s not the idea man of the two. Sean is the one the ladies can trust.”

That formula of cute nice guy paired with the school’s lovable sociopath is a familiar one that happens to deliver great laughs in one of D’Agosto’s all-time favorite teen flicks.

“I grew up on Ferris Bueller’s Day Off. That one’s the one that sticks out in my head,” he says.

D’Agosto is also highly aware of what the appearance in a film like Fired Up can do for a career. He, like so many others has witnessed the lightning strikes that have hit performers like Sean Penn and Forest Whitaker (Fast Times at Ridgemont High), Paul Rudd (Clueless) as well as Kirsten Dunst (Bring It On) after taking parts within this genre. Still, he hasn’t thrown caution completely to the wind just yet.

“I certainly hope [Fired Up] allows me to keep working,” he confesses.

While he’s pleased that he is still in that rare group of actors and actresses who can pass for young men and women years their junior, D’Agosto has also been giving a lot of thought to whom he’d love to be partnered with creatively on future projects.

“I would really love to work with someone like Wes Anderson who walks the line between comedy and drama so well,” he says.

For now, he’s set to ride the wave of what Fired Up and some of his previous roles have given him, which is a solid fan base of younger viewers.

“The business gives you what it sees in you. In this particular situation, I look young. I always have,” he explains. “As far as that goes, you take the good projects and jobs that you like and some of the ones they give you.”

From there, D’Agosto acknowledges that he enthusiastically throws himself into the work and never looks back.

As for his passions off screen, he is one actor who might give his character a total run for the money in real life. How far would D’Agosto go to score with a girl who seemed a bit unattainable at first? Join a cheerleading squad? Shave his head?

“I tell you what, if I really met my match, I wouldn’t put it past myself to go that far,” he says. “But it would be specific to that girl.”

Fired Up releases in theaters Feb. 20.