CRUISING THE BALTIC SEA: Have a blast onboard and on land too! 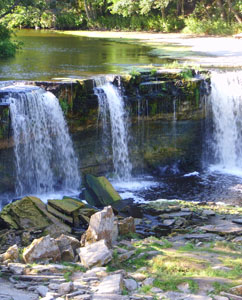 A few things pop instantly to mind when you think of the amenities to be experienced at a luxury hotel. Incredible food, premium spirits and spa pampering all served up with a smile are among the expected indulgences.

Of course, your room must have all the latest bells and whistles, and it sure doesn’t hurt if there’s a gorgeous view waiting when you pull back the window shades. If you find yourself enjoying everything listed above, but you notice that the view out the window keeps changing, then chances are you’re living the good life aboard one of the majestic cruise liners operated by Regent Seven Seas Cruises.

When you step aboard an RSSC ship, you are entering a world that’s been meticulously designed for your comfort. My cabin aboard the Voyager was very spacious. Satellite phone and TV, an iPod station and a well-stocked mini-bar were a few of the in-room diversions.

Outside of the cabin, Voyager is like a mini city where there’s always something to do; participate in an early morning workout with the ship’s fitness instructor, catch an afternoon matinee showing of a current movie or dance late into the night at the Voyager Disco. Voyager doesn’t skimp on live music either; jazz artist Christian Tamburr (the Dazz Band) performed several times during my cruise, and he is typical of the high-quality artists that RSSC engages.

Best of all you can enjoy any of these things without worrying about the cost or about tipping since Voyager is an all-inclusive experience. Visits to the spa and select other activities cost extra, but otherwise all the food and beverage (including room service and adult beverages) and entertainment is available as you desire, having been built into the cost of your cruise. It’s all enough to make you want to never leave the ship, but let’s not forget the thing is moving!

The cruise I took aboard Voyager was a Baltic Sea cruise that started out in Stockholm, Sweden and ended up in Copenhagen, Denmark, with stops in between in Estonia, Russia, Finland and Visby Island. At each stop you can opt to disembark and either explore on your own or purchase a shore excursion.

The menu of excursions generally offers something for all tastes; shopping, art and cultural appreciation, athletic adventure and general sightseeing are just a few of the themes of various tours on offer. When the ship stopped in Talinn, Estonia I took a tour out into the pretty countryside where the coach stopped at a waterfall, an overlook with a panoramic view of the Baltic and eventually at a fish farm where the whole tour group tried their hand at fishing for our lunch.

The ship docked for three days in St. Petersburg, Russia, and I got to see much of the city during that time. The first day I took a boat ride on the city’s Neva River that afforded a spectacular view of the famous State Hermitage Museum, where over three million works of art are housed.

Later I returned to the city to see a band from Latvia play at the Street Life Café. I toured the city’s shopping district at Nevsky Prospekt, rode the city’s deeply buried subway and of course sampled Russian vodka. In Finland, I took a hair-raising speedboat tour of Helsinki harbor, and on Visby Island (part of Sweden) I visited a recreation of a Viking village where you can do Viking-like stuff like throw axes (only at targets!).