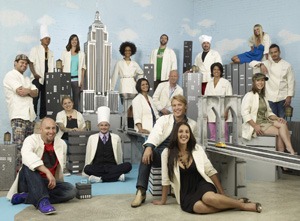 Yeah, I know, food and models have no place being grouped together, but these shows are two of the three reality competition programs I actually enjoy (“Project Runway” being the third). Although the formula for “America’s Next Top Model” is getting quite stale – this is its 12th cycle after all – I can never get enough of the antics and smarmy comments from runway coach Miss J (J. Alexander) and photo shoot director Mr. J (Jay Manuel).

This cycle, the 10 model wannabes include a conspiracy theorist Monique, a hipster “street creature” London and Allison, who is fascinated by hemophilia. When Tyra reveals that she used to get nosebleeds all the time when she was young, Allison gushes, “Jealous!” Oy vey.

While the girls of “ANTM” are all aspiring to get their feet into the door of the modeling world, the contestants on “Top Chef” are pretty much all seasoned professionals. The solitary participants who were recent grads from culinary school were ousted in the first episode of this current season five set in New York City.

Since then, they’ve had to make Thanksgiving dinner for the Foo Fighters, cater judge (and Special Projects Manager with Food & Wine magazine) Gail Simmons’ bridal shower and copy dishes of the world-renowned chef Eric Ripert. The number of contestants has whittled down to the final four: Fabio, Stefan, Carla and Hosea, who will head to New Orleans to create dishes for guest judge Emeril Lagasse. My prediction to win: the über perfectionist German, Stefan.