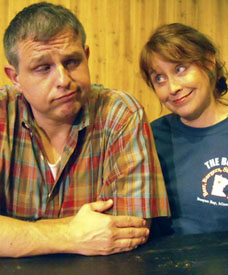 Soon after opening curtain of “A Don’t Hug Me County Fair,” it’s evident that we’re not going to see anything more than a two-hour sitcom with music, and a silly one at that. This is playwright Phil Olson’s third entry into the Don’t Hug Me series, and the premise is much thinner than the previous two.

The Bunyon County (Minnesota) Fair is here, which means the Miss Walleye Queen competition is nigh. Clara, wife of bar owner Gunner Johnson (Tom Gibis), and the town looker, Bernice, seem to be the only contestants until Gunner’s twin sister, aptly named Trigger (also Gibis, in drag), shows up and decides she wants to be queen.

The rest of the story is told via 16 original songs by Olson and his brother Paul, and, though some are clever, there’s not a show stopper in the bunch.

Musical
Summer: The Donna Summer Musical Comes to the Hollywood Pantages from Nov. 5 thru 24!
1,227 views