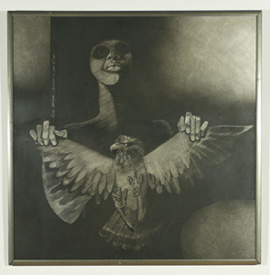 A piece by Tim Washington
(Credit: Courtesy of LMU)

Laband Art Gallery’s current exhibit is in honor of Gallery 32, a 1960’s Los Angeles gallery that was influential in bringing African-American art to the scene. Curated by Carolyn Peter and Damon Willick, the exhibit features original works from Gallery 32 and offers a history of its scope and influence.

Suzanne Jackson opened the gallery in 1968 in unit 32 of the Granada Building at 672 North Lafayette Park Place. She named it after the unit number in homage to Alfred Stieglitz’s Gallery 291 in New York City. Though never meant to be exclusively a “black gallery,” it became an important place for African-American artists to come together.

Jackson was influenced by her drawing teacher at Otis Art Institute, Charles White, who viewed art as a vehicle for social activism. Thus, the gallery often benefited the Black Arts Council, a group in protest of LACMA’s refusal to showcase African-American artists, and the Black Panther Party.

One of the gallery’s most recognized works is a photo of John Stinson posed in his postal uniform in the doorway of his mail truck. Like the anti-hero artist before him, Jackson Pollock, Stinson used the photo to idealize his working class background. Jackson herself had to work to support her art career by dancing at a local nightclub.

David Hammons, another prominent Gallery 32 artist, was well known for his body prints in which he coated his body in butter and powdered ink pigment and pressed himself against paper or glass. Betye Saar curated one of the first feminist exhibits entitled Sapphire, You’ve Come a Long Way Baby, after the slang term “sapphire” used for a strong woman of color.

Though the gallery flourished for only two years, its influence on the do-it-yourself attitude of L.A. art and the African-American art scene is immeasurable.