A TALE OF THREE PRINCES: Spare the Death, Spoil the Gamer? 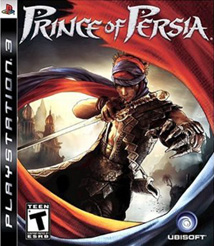 For those who missed it, this winter saw the latest incarnation of the “Prince of Persia” saga. Like each other vision of the quest of one prince against overwhelming odds, this game features a lone hero, a princess in distress and a series of death defying leaps and sword fights.

That is not to say that this is just a rehash. Far from it. Despite his gritty, roguish style, this new prince – and the kingdom he must free – shines with some of the most beautiful cel-shading since Okami. “Prince of Persia” also forgoes the linear, death-at-your-heels gameplay of the previous versions for a free-roaming approach that allows for more planning and exploration.

The biggest – and possibly most controversial – change, however, is the fact that death is no longer a factor thanks to the prince’s constant companion: a princess who can fly and use magic. If the prince misses a jump, the princess will automatically fly in and carry him to safety. Even losing in combat is no longer a death sentence, but rather a momentary inconvenience.

As anyone who has played previous “Prince of Persia” games can tell you, this is not entirely new. Death was not a permanent situation in the original, and the “Sands of Time” gave players a limited number of chances to turn back the clock.

The major difference is that, unlike the original’s one-hour time limit or the limited uses of the sands, this prince essentially cannot lose. No matter how poorly you play, you can eventually win just by sheer repetition.

Now, without invoking too much of the old “when I was a kid” mantra, it seems like more and more modern games give you the opportunity to fail your way to success. Back in the 8- and 16-bit days gamers had to struggle against limited lives and continue, forcing them to restart and hopefully become a better player in the process. This extreme difficulty was compounded by the fact that there wasn’t any Internet, so you had to find a strategy guide or a friend who was better than you to beat the really tough areas.

Of course, it is up to the player whether death’s weakened grip is a good thing. It does give non-gamers a chance to succeed where normally only the devotees would have a chance. It also gives more gamers a chance to see the endings without having to go to YouTube. After all, the main reason many games were so difficult was because of the limitations of the hardware, so there is no reason that games have to be too difficult to enjoy.

That said, as a gamer, it does seem that there is something ultimately missing when you take out the possibility of failure. While there is still definitely enough excitement and challenge in newer, death-free games like “Prince of Persia,” eventually the lack of the potential to lose removes the motivation to beat the game. Sure, the prince has to scramble from a hanging ring onto a magical plate that will propel him across the stage, but without the chance that his neck might be broken, these breakneck antics eventually become routine and even dull.

Ultimately, it seems we are going to see more games where death is at worst a mild inconvenience. Fortunately, as long as games like “Prince of Persia” compensate with beautiful graphics, intense gameplay and deep storylines, we still have a reason to keep playing.