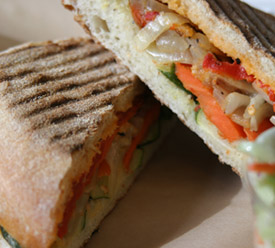 Vegan food is a point of contention in most gastronomic discussions, and the arguments from either party don’t seem to want to change. Vegans and meat lovers both tend to be self-righteous and scoff at the other side. Vegans tell meat eaters that eating animals will ruin the environment, their bodies, their minds and society at large. Meat lovers tell vegans that if what they do is living, then you may as well bring on the coffin (with an extra side of bacon).

But it goes deeper. Serious chefs around the world have been known to try a vegan restaurant or home cooked meal, sit down, eat and walk away saying “I get that you want to be healthy, but you should still know how to cook a carrot properly.” The problem, in most cases, is that for vegans it’s about the intent of the food, while for meat eaters it’s about the execution. Then there’s Seed, the “vegan/macrobiotic bistro” and follow-up to M Café de Chaya from classically French-trained chef Eric Lechasseur. More welcoming, casual take-out joint than bistro, the food is both ordered and picked up at the counter.

The food is served in biodegradable take-out containers whether they’re eaten on site or not. With a fine selection of organic teas and tables adorned with condiments of sesame salt, shiso powder and dried green seaweed, the restaurant certainly appeals to vegans. They’ll find their way to a new meat-and-dairy-free food joint since I’m pretty sure all info on new vegan restaurants opening gets uploaded into a biodegradable chip implanted in their brains.

But what about the rest of the population? While they can’t expect a lot of hardcore flesh-craving burger addicts to find their way inside, what about the people in between? The pommes frite and sweet potato fries hold up surprisingly well when fresh out of their bubbling bath of rice bran oil, with a good crunch and appropriate amount of salt. They taste better than most of the restaurant fries around town but should be consumed quickly, since they get less palatable by the minute.

But while many of the problems that meat eaters have with vegan food are the fake animal substitutes like Tofurkey, Chef Lechasseur doesn’t shy away, pulling off a remarkably impressive barbecue tempeh burger with individual ingredients that rise far above the sum of their parts. The burger gets a much-appreciated textural boost from the slightly crisp bun.

Yet as some dishes sing, others like the Seed Chop-Chop salad miss the mark with ingredients that seem to be working against each other. The most confounding and possibly representative dish at Seed may well be the Seitan Pepper Steak Bowl. Seitan, a type of wheat gluten, is an oft-underappreciated protein, but in the right hands can be a textural delight. The pieces of “meat” in this particular version are flavorful, with the moisture and tenderness of a nicely braised short rib, but sadly, rest atop a very muted bowl of brown rice and vegetables. The dish simultaneously shows both what modern vegan food can be and what it is trying to get away from. In the end, even after a flavorful and light vegan coconut mousse (despite the discomforting hard, gelatinous layer on top), the restaurant can’t help but be slightly puzzling. Would the average person be happy to sit down to an excellent vegan burger, a container of salty pommes frites and a soda? Absolutely. But with those three items coming in at just under $20, unless that person also cares an awful lot about the quality of the ingredients going into their body, it’s still a pretty tough sell.