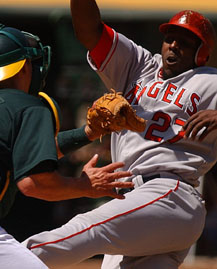 Outlook: If not for a tattered starting staff, the Dodgers would be a logical pick to repeat as division champs. Former Marlin Brad Penny and Odalis Perez are not healthy, but Lowe (72-59 career record) will certainly help. The lineup is bolstered by Drew and Kent (combined 58 HRs, 200 RBI).

Outlook: The retirement home team of the division certainly got older, but did the Giants get better? Barry Bonds is expected to miss the start of the season after recovering from another knee operation. The youngest starter is a fragile 31-year-old Edgardo Alfonzo (11 HRs, 77 RBI in ‘04). The Giants will need more than Jason Schmidt (18-7, 3.20 ERA) on the mound.

Outlook: Vazquez (78-78 career record) should thrive back in the National League, but Ortiz can frustrate with the numerous walks he yields. Glaus (18 HRs in 58 games last year) and Green (average of just 23.5 homers the past two seasons) – and the return of Luis Gonzalez (career-low 105 games in ‘04) – should help the lineup.

Outlook: The class of the division and quite possibly the National League. The defending NL champs reloaded by acquiring Mark Mulder (17-8, 4.43 ERA last season) from the A’s and get a full season from Larry Walker (batted .298 with 47 RBI in 82 games after trade from Colorado) in their potent lineup. Only injuries to an injury-prone starting rotation can stop them.

Outlook: If the Astros had re-signed Beltran and/or Kent, they could contend for the division title. Instead, Houston’s stellar starting pitching staff – seven-time Cy Young winner Roger Clemens (18-4), Roy Oswalt (20-10) and Andy Pettitte have been front-line starters, and Brandon Backe had three solid postseason outings – will have to dominate nearly every game. The lineup’s best hitter – Lance Berkman (.316, 30 HRs, 106 RBI) – might be out until the All-Star break because of a knee injury.

Outlook: Ben Sheets (12-14, 2.70 ERA) is coming off back surgery, and the Brewers’ hopes rest on the right-hander. The remainder of the rotation – Chris Capuano and Gary Glover have 24 combined career victories – is terribly unproven. Lee (31 HRs, 99 RBI with the White Sox) and Geoff Jenkins (27 HRs, 93 RBI) give Milwaukee pop in the middle of its lineup, but probably not enough.

Outlook: A 14th consecutive division crown will hinge on how much mileage the Braves can get from veteran outfielders Brian Jordan and Raul Mondesi. John Smoltz’s (2.76 ERA, 85 Ks in 81-2/3 innings as a reliever in ’04) return to the rotation will help, if his elbow holds up. The pieces are in place for another division title, if not another postseason appearance.

Outlook: Jon Lieber (14-8, 4.33 ERA with Yankees last season) is a decent pitcher, but when he is your ace and you play in a cozy park, your pitching is in trouble. With 81 games at Citizens Bank Park, the Phillies will score plenty, but their mediocre pitchers will surrender plenty. The Phillies’ best pitcher is closer Billy Wagner, but the rotation will have problems getting him the ball.

Outlook: On paper, the Marlins have the most complete team in the division. Guillermo Mota as the first-year closer is the lone doubt. Should young starting pitchers A.J. Burnett and Josh Beckett, as well as veteran Al Leiter come through, Florida finally might prevent Atlanta from a 14th consecutive division title.

Outlook: One might like to say the Mets will challenge for the division title, but remember, these are the Mets. Martinez’s addition improves the pitching. Beltran’s productive bat will boost the offense. It’s just a matter of whether new manager Willie Randolph’s team can put it all together.

Outlook: The Nationals will get an emotional charge playing in D.C., but it won’t be enough to carry them through the season. The lineup improved by adding Guillen (27 HRs, 104 RBI) and Castilla (35, 131), but there are too many holes on the mound. Workhorse Livan Herandez (9 complete games, 255 innings pitched) and Esteban Loaiza (21-9 in 2003) have been good, but rarely great. And, their best years may be behind them.

Outlook: The only question preventing the Angels from being among the Red Sox and Yankees as AL favorites is the starting pitching. Ace Bartolo Colon (18-12, 208-1/3 innings pitched) is once again experiencing a creaky back, and the rest of the rotation is not that impressive. Their lineup will score plenty of runs, but effective starting pitching will determine the Angels’ playoff chances.

Outlook: The A’s fortunes depend on how quickly the talented but inexperienced pitchers replacing Hudson and Mulder develop. Incumbent ace Barry Zito needs to bounce back from an 11-11 season. With the exception of Eric Chavez, the lineup won’t scare opposing starting pitchers.

Outlook: Like the Angels, the Rangers are loaded with big bats – their young infielders (3B Hank Blalock, 2B Alfonso Soriano, 1B Mark Teixeira and SS Michael Young) averaged 32.5 home runs and 103 RBI each in ‘04. The pitching staff is suspect. However, Texas’ starting rotation might be better than the Angels. Don’t be surprised if the Rangers, in playoff contention until the final week last season, finish atop the AL West.

Outlook: They probably will score more runs with Sexson and Beltre (48 HR, 121 RBI in ’04) batting third and fourth. Sexson averaged nearly 40 homers and 117 RBI from 2001 through ’03. But the pitching is a mess. Ancient Mariner Jamie Moyer, 42, heads an injury-prone staff. Seattle is still waiting for Joel Pineiro (30 combined victories in 2002 and ’03) to become the ace, but the 26-year-old had trouble staying healthy last year (just 21 starts).

Outlook: The Twins are slowly becoming the Braves of the American League. Each year they seem to lose a key cog and still find ways to finish atop the division. They will be trying to replace the left side of their infield (Guzman and Koskie) this season. Minnesota will do it with former No. 1 pick Michael Cuddyer at third and Castro. AL Cy Young winner Johan Santana (20-6, 2.61 ERA) and closer Joe Nathan (44 saves in 47 chances) make the Twins the pick to win the AL Central – again.

Outlook: Losing the big bats of Ordonez and Lee will hurt, because Dye (no more than 24 HRs and 86 RBI any of the past three seasons) is a downgrade, and Frank Thomas always seems to be aching. Depending on which Freddy Garcia (25-25 combined the past two seasons) shows up, the White Sox could be headed for the bottom of the division. Hernandez and Jose Contreras are not improvements.

Outlook: Surpassing the White Sox for second in the division will happen for the Indians if they get a healthy season from Millwood (at least 10 victories in past five complete seasons). Left-hander Cliff Lee (14-8 in ’04) is ready to emerge as the Indians’ next ace. The lineup is stocked with power – Travis Hafner had 28 homers and 109 RBI last year – and Bob Wickman (86.3 save percentage since the start of the 1999 season) closing games also should help.

Outlook: There’s better starting pitching in Motown than in Chicago’s South Side, so don’t be surprised to see the Tigers finish in the top three in the division. Jeremy Bonderman (11-13, 4.89 ERA in 2004) is a future Cy Young candidate, and new closer Troy Percival (33 saves in 38 chances last year) still has some gas in his fastball. Ordonez (29 or more HRs from 1999 through 2003) is another potent bat behind Ivan Rodriguez.

Outlook: Kansas City has a handful of promising hitters: Unheralded infielders Angel Berroa (.413), Mark Teahan (.375) and Ruben Gotay (.344) have had strong showings during spring training. But outside Zack Greinke, a dearth of good young pitching – retreads Jose Lima (13-5 with the Dodgers last year) and Brian Anderson (81-81 career record) are the most proven among the team’s staff – will not help the Royals escape the bottom of the AL Central.

Outlook: The Yankees added five-time Cy Young winner Johnson (16-14, 2.60 ERA in Arizona), the blossoming Pavano (18-8 with the Marlins) and Wright (15-8, 3.28 ERA with the Braves). Johnson and Pavano have already jumped to the top of the rotation.

Outlook: Scoring runs shouldn’t be a problem for the Orioles, not with Sosa, Rafael Palmeiro and Melvin Mora (.304, 27 HRs, 104 RBI). And Miguel Tejada batted .311 with 34 HRs and 150 RBI in ’04 – his first with the Orioles. They have some promising young arms on the mound. In order to contend for the wild card, they will have to develop quickly. Until Baltimore’s pitching is on the level of the Red Sox and Yankees, third place will be the best the Orioles can expect.

Outlook: A mediocre farm system of pitchers – and the level of competition in the AL East – will keep the Devil Rays resigned to the bottom half of the division. Tampa Bay is producing some quality hitters, though, in All-Star Carl Crawford (.296, 19 triples, 59 steals), Rocco Baldelli (16 HRs, 74 RBI) and Aubrey Huff (29 HRs, 104 RBI).

Outlook: Where is the blueprint for this team? The Blue Jays can’t seem to hold on to their best hitters – namely Delgado – and there are no quality relievers. At least they still have 2003 AL Cy Young winner Roy Halladay (49 victories the past three seasons) and Ted Lilly (12-10 in ’04) in the starting rotation. Another cellar-dwelling season for Canada’s remaining tea