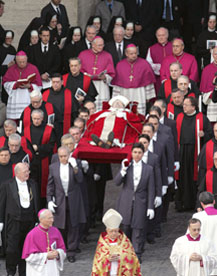 Pope John Paul II died Saturday after a two-day end-of-life drama that sparked an unprecedented global outpouring of attention to his life, his legacy and what lies ahead for the Roman Catholic Church.

The first news of his death came via an e-mail to journalists by the papal spokesman, and then it was announced to an estimated 70,000 people gathered in St. Peter’s Square. Some wept uncontrollably, others stared in disbelief, and still others bowed their heads in prayer.

"We all feel like orphans this evening," Undersecretary of State Archbishop Leonardo Sandri told the crowd.

The bells of St. Peter’s Basilica tolled in a solemn signal of mourning. People streamed into the square and the crowd overflowed into nearby streets.

Many said they knew what happened when they saw the light flick on in the window of John Paul’s apartment, three stories above Bernini’s colonnade.

"He was so strong, and he always spoke about our problems," said Cotbrina Tosti, 26, who was born the year he ascended to the papacy, and who stood, in tears, in the packed, hushed crowd. "He had his opinions and sometimes they were not ours, but he spoke without judgment and he always spoke with love."

In Washington, President Bush said that "the Catholic Church has lost its shepherd, the world has lost a champion of human freedom, and a good and faithful servant of God has been called home." He said the pontiff "launched a democratic revolution that swept Eastern Europe and changed the course of history. ... We will always remember the humble, wise and fearless priest who became one of history’s great moral leaders."

From the moment that senior church officials told the world on Friday that the pope was dying, the international news media focused on the Vatican with rare intensity, engaging Catholics and non-Catholics alike in the pope’s fate. Perhaps not since the September 11th attacks in New York has any single event so dominated the world’s attention, a reflection of John Paul II’s charisma, humanity and spirituality, which transcended religious doctrine.

In the United States and Britain, 24-hour news channels covered almost nothing else, beaming a steady stream of images from St. Peter’s Square by satellite. When Karol Wojtyla of Poland became pope in 1978, satellite transmissions were limited to a few minutes an hour. There were no cell phones, no Internet or e-mail and no 24-hour news cycle.

The pope’s death at age 84 came after his long, slow decline from Parkinson’s disease and old age accelerated in recent weeks into a series of health emergencies that required three hospitalizations and the insertions of feeding and breathing tubes.

On Friday, when he developed a life-threatening blood infection, he told Vatican officials that he did not want to be taken to the hospital again. Instead, he began seeing a series of top officials in his bedroom in the papal apartments.

One was Cardinal Edmund Szoka, the governor of Vatican City and former archbishop of Detroit, who told Knight Ridder that when he visited the pope on Friday, he was propped up on pillows in a large bed in the center of the room.

Szoka said there was a breathing tube in the pope’s throat.

"He looked at me with his eyes. He tried to nod at me. I know he recognized me," the American cardinal said. Szoka knelt on the floor, holding the pope’s hands and alternately stroking his arm.

Szoka said he remained in the room for about five minutes. In addition to doctors, he said there were four Polish nuns on hand who have been with the pope for decades.

When Szoka stood to leave, he said, he instinctively blessed the pope and touched his forehead.

"Without thinking, I got up and I blessed him, and the pope tried to bless himself also," with an abbreviated movement of his right hand, Szoka said.

"It was very sad and very touching, and one of the most emotional moments in my life," he said.

The pope was last seen in public Wednesday when he briefly appeared at his window, speechless.

Even before the death was announced, news of the pope’s decline had elicited an outpouring of condolences and praise from around the world.

That was perhaps fitting for a pope who traveled more than 745,000 miles during his papacy, the equivalent of 30 times around the globe, according to the Italian news agency ANSA.

He made 104 trips outside Italy, visiting a total of 130 countries. Pope Paul VI, who presided for 15 years before Pope John Paul I’s 33-day papacy in 1978, had been the most traveled pope in history at that time. He visited 16 countries.

In assessing his legacy, admirers focused on John Paul II’s role in defeating Communist domination of his native Poland and Eastern Europe, and of his enormous charisma as he steered the papacy into the media age. Critics recalled his unflinching advocacy of sometimes controversial church doctrines, including the Vatican’s condemnation of homosexuality and birth control, its requirement for priest celibacy, and its ban on women in the priesthood.

Observers have long noted that his appointments had ensured that the College of Cardinals, which will elect his successor, was replete with conservatives who see no room for compromise on those issues.

Still, Vatican-watchers point out that cardinals often pick a pope who is very different from his predecessor.

According to tradition, to certify the pope’s death, the camerlengo - Eduardo Martinez Somalo – would have called out his baptismal name, Karol, three times. Hearing no response, he would then have tapped the pope’s forehead with a small silver hammer bearing the papal coat of arms.

The camerlengo would then have proclaimed, "The pope is dead." He would have used the silver hammer to smash the papal seal, an act once intended to prevent the forgery of papal decrees.

The next nine days will be devoted to funeral rituals for John Paul II. By church law the conclave – the term for the secret meeting of cardinals to elect the next pope – must begin at least 15 days from today, but not later than 20.

Speculation about the next pope already has begun, as cardinals from all over the world begin heading to Rome to participate in the conclave. More of them than ever before – 44 of the 117 papal electors – are from developing countries in Asia, Africa and Latin America, where a majority of the world’s one billion Catholics are located.

In St. Peter’s Square Saturday night, Antonietta De Angelis, 52, said came out at 9 p.m because she felt a need to pay respects to a pope who had meant a great deal in her life.

"He gave so much. He gave to everyone," she said. "I’m so happy that we were able to give something back - to give him some comfort as he suffered at the end." © 2005, The Miami Herald. Distributed by Knight Ridder/Tribune Information Services. 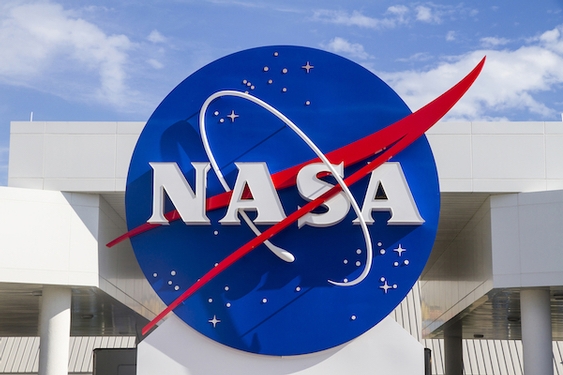 World News
NASA will fly your name around the moon on historic mission. Here’s how to sign up
263 views

World News
In the ring, they were gods. Now the coronavirus is forcing lucha libre stars to sell street food
992 views