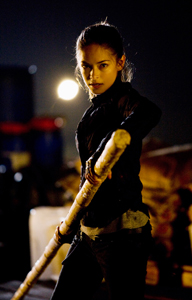 Gaming fans, get ready! The latest incarnation of a popular game franchise is hitting the screens.

Street Fighter: The Legend of Chun-Li is not the Street Fighter you may remember … starring a certain Belgian action star. This is an entirely new creation of the incredibly popular video game.

This time, the focus is on Chun-Li, played by Kristen Kreuk of “Smallville.” The story follows Chun-Li as she comes of age and becomes a Street Fighter.

Chun-Li’s motivation to expand her martial arts expertise comes from helping to protect the slums of Thailand from the evil Bison, played by Neil McDonough. This Bison is not an evil overlord looking for world domination; instead he is a slick, successful and soulless businessman. A martial arts expert as well, he travels with his right hand man Balrog, played by Michael Clarke Duncan, and keeps his secret weapon, Vega (played by Taboo of Black Eyed Peas), close at hand.

Chun-Li is not alone in her fight, however. She receives guidance from her mentor Gen, played by Robin Shou, who fans will remember as Liu Kang in the Mortal Kombat films. In addition to her mentor, Chun-Li is able to team up with local cop Maya Sunee and Interpol agent Charlie Nash also on the trail of Bison, played by Moon Bloodgood and Chris Klein, respectively.

McDonough talks about the approach they took when making the film: “We wanted to make a fresh take on ‘Street Fighter,’ yet stay with the core of what the game was.”

McDonough also took this fresh approach to his character of Bison.

“We tried to make him much more of a Richard Branson type. I didn’t play Bison evil at all; I played him like a businessman. As a businessman sometimes you have to cut corners here, cut things there. And Bison sometimes has to cut people, literally. He has no emotion toward that; it’s just business. He’s going to take over the world, and nothing’s going to stop him,” says McDonough.

“When you play somebody good, you’re restricted, and once you’re restricted, you can’t go over the top,” explains Duncan, talking about playing Bison’s right hand man Balrog. “As a bad guy you can be diabolical, and it’s fun because you don’t have the restriction. The worse you are, the better it comes off on camera.”

Duncan and McDonough were the “team of evil” as McDonough puts it.

“Michael and I have been buddies for a long time, and so to work with him was just a blast,” says McDonough about the joy of working with Duncan and the rest of the cast. “And to work with Kristen, who was just tireless … never complained, always worked hard; it was wonderful.”

Kreuk, having never played the game growing up, explains what drew her to the film.

“I think having that story there; that mentor and apprentice personal growth story is part of what drew me to the movie in the first place. I like that story of mentor and apprentice,” she says. “I think it’s really beautiful and is something that as human beings, we all seek out in some capacity. To find somebody that you can recognize is greater than you and has skills that you want to build and that you aspire to; I think it’s beautiful.”

The theme of helping others is definitely something the entire cast took to heart while filming in the slums of Thailand. Kreuk herself has been working on “GirlsByDesign,” a Web site designed to help girls grow into strong women.

“I’ve been putting a lot of my effort into it, and I’m very excited about it,” Kreuk says about her project. “Being in this industry, I started to think there wasn’t anything out there encouraging young women to grow themselves as females in the world. A lot of the industry kind of tears girls down, and I didn’t want to participate in that. I was trying to think of a way I could help to encourage them instead.”

Street Fighter: The Legend of Chun-Li releases in theaters Feb. 27.