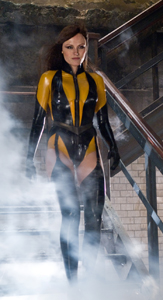 It is an expensive, bold endeavor, an adaptation that strives for nothing short of epic. Even the marketing hints at something extraordinary.

The graphic novel transcended its contemporaries. Will the film do the same?

For the uninitiated, Watchmen was originally a 12-issue comic book series published by DC Comics in 1986 and 1987, and it was created by writer Alan Moore and artist Dave Gibbons. The comic has since been reprinted in a collection, has won several awards and is considered by many literary critics to be a modern classic. Like many successful books before it, Hollywood set its sights on the property as a viable product.

As a film property, Watchmen has been in and out of development since 1986, most notably with Terry Gilliam. No stranger to difficult properties, he was once attached to direct.

Creative differences have seen the project drift in and out of every major studio in Tinseltown. Producer Lawrence Gordon has been with the project since the beginning, and 23 years later he is about to reap the benefits of patience.

On March 6, after starts and stops and every creative snag imaginable, Watchmen is finally hitting the big screen.

And when asked whether or not the film lives up to his expectations, Gordon answers without hesitation.

“It’s better,” he says, and you can hear the satisfaction in his voice.

It is most likely a virtue that the film took so long to reach the big screen. Larger than life superheroes, their flying machines and a crystal castle floating across the face of Mars, these are the kinds of images that will undoubtedly benefit from modern movie magic.

“Now is the time for it,” assures illustrator Dave Gibbons. “The effects have got to a level where if you can imagine it, you can make it real. And, also, you can integrate them with the real world.”

Watchmen exists in its own very realistic universe, but it is a universe that borrows liberally from our own. Though the original comic was set in modern times upon its publication, almost 30 years have passed, which makes a literal adaptation of Watchmen one part fantasy and one part period piece.

“I think one of the masterstrokes of the movie is that it is set in the 1980s,” says Gibbons. “It then becomes a period piece, and it kind of becomes timeless in a way. It’s turned into a universal story.”

So, what exactly is the story of Watchmen? At its core, the narrative is a mystery surrounding the murder of a costumed hero, though the plot thickens by way of intricate conspiracies that may have dire consequences for all of humanity. Like Chinatown before it, it is at once a deconstruction of the genre and a multi-faceted drama.

Is it possible to successfully translate such a seminal piece of work in a way that not only satisfies the fan base, but can also appeal to someone that has never read the comic?

So, if you are familiar with the source material, then you can expect a movie that is every bit as intelligent – and brutal – as last year’s The Dark Knight. These heroes are in every way as fallible as you and I. They are compassionate and violent, idealists and nihilists. These masked men and women are a mirror for all of the things that are at once great and terrible in our society.

Jeffrey Dean Morgan portrays the Comedian, a member of Watchmen that embodies the darker side of the American Dream. His performance is a scene-stealer, frightfully realized and certainly a high point of the film.

“It’s hard to make excuses as an actor for that brutality, and everything the Comedian does is …, ” Morgan pauses, then says, “He talks about staring off into the abyss. The Comedian was the abyss.”

Adding to the dramatic heft of the film, Oscar-nominated Jackie Earle Haley (Little Children) plays the character Rorschach, an idealistic sociopath vigilante. His performance is at the core of the story and much of what the audience experiences is through his character.

“I think it’s literally kind of affected the way I see the world,” Haley says of his performance. “I’m a little bit more cynical.”

Of course, this being the digital age and all, you can expect a DVD that will try and outdo the theatrical release.