BOOZOO BAJOU: “A Present From The Past Wrapped In Future Sounds” 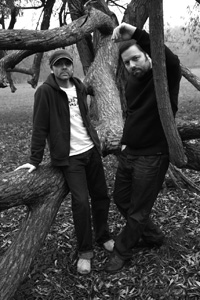 When Southern California doesn’t inspire cursing from its residents and state legislature over its economic woes, it provides musicians with the musings necessary to make timeless music.

When Florian Seyberth and Peter Heider of the German DJ duo Boozoo Bajou began writing what eventually became Grains, they decided to immerse themselves in what they loved most: the laidback culture California is well-known for.

Seyberth and Heider refined their vision and focused on the 1970s when America struggled to be at peace. They channeled the easy-going nature of the hippie counterculture movement and created the nine tracks, which comprise their newest release, Grains.

Although Los Angeles’ famous street, Laurel Canyon Boulevard, inspired a majority of this album, it has the vibe of painting a mental picture of a soothing sunset at the beach on a warm summer day with its jazzy compositions layered on top of its loose beats. Songs vary from instrumentals to tripped-out vocal odysseys through relaxing beats that beg for repeat listens.

British singer-songwriter Rumer guests on two tracks, “Same Sun” and “Messengers.” The addition of her voice creates a vacuum of interest that immediately sucks the listener into the song. This is by no means the type of album to listen to in the car, as its relaxing nature might cause an accident.

Boozoo Bajou’s collaboration with Rumer is their first, and as Seyberth hints, hopefully not their last.

“We look forward to making a whole album with her, under her name possibly,” Seyberth says. “I would definitely love to work with her more.”

Although they originally hail from Nuremberg, Boozoo Bajou is seen as more of an underdog in their hometown than they are abroad.

The world got to know Boozoo Bajou’s name in 1998 with their breakthrough single “Night Over Manaus.” The song was the first tune Seyberth and Heider worked on together. Sensing that what they touched turned to gold, they followed up the collaboration with their first and second albums, 2001’s Satta, 2005’s Dust My Broom and two Juke Joint mix compilations.

Now, a decade since their inception, Boozoo Bajou are determined to reinvent themselves with each subsequent release to remain as fresh as the beats they deliver on Grains.

“Progression matters,” Seyberth says. “As long as I like it and it’s different, it’s good.”

The maturity of a band is inevitable, unless said band desires stagnation. Such is not the case for Boozoo Bajou.

“We are more open to melody and songwriting now,” Seyberth says. “Before we were focused on track.”

In order to achieve variety, Boozoo Bajou employed the folky experiences they had at the UK’s Green Man Festival in 2008 along with the stylings of Neil Young, Jackson Browne and Joni Mitchell interspersed throughout their electronic soundscapes. Joining the forces of folk and electronic might seem like an odd pairing at first, but after listening to “Tonschraube,” “Same Sun” or “Fuersattel,” whatever red flag was raised should be immediately withdrawn.

Boozoo Bajou’s success in their marriage of old and new is possible because it doesn’t come across as pretentious. Strangely, it blares out of a pair of speakers as organically as any other album composed with live instruments.

Another contributing factor to Grains’ success is plain ol’ curiosity. Seyberth admits his curiosity allowed him to find the right type of beats to convey his vision of cool.

“We just did what we wanted to do personally and music-wise,” he says.

Boozoo Bajou’s evolution relies heavily on their eclectic identity and spontaneity. Without any outside interference, Grains is the representation of what Boozoo Bajou has become.

Grains will be available March 3. For more information, visit boozoobajou.com.