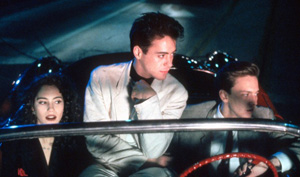 So what if it’s not summer (or even summer weather)? The rain has finally stopped, and the brisk night air is begging for an outdoor movie screening. Thankfully, Hollywood’s Space 15 Twenty knows no season and has the next few months filled with courtyard showings of favorite and obscure films so everyone can take a June-worthy load off.

Tonight, their endless use of the communal space continues with the next screening in 1520’s “All L.A., All the Time” Wednesday night film series: Less Than Zero.

The Bret Easton Ellis (The Rules of Attraction and American Psycho) college essay-turned-novel-turned-movie stars Robert Downey Jr. and one of the guys from Weekend at Bernie’s as drug-filled teenagers from upper crust Los Angeles. Back for the summer from their first year away at college, the story follows a group of rich high school friends as they party in big houses with no parental supervision, get into massive drug debts with other rich kids and act nonchalant about their decadent lifestyles.

Although the movie falters from the book of the same name, the incessantly ’80s factor – and extreme L.A.-ness – makes it a must-see (7 p.m.-9 p.m.) The Space’s aptly titled eatery, Snack Bar, will be giving away free soda and popcorn to those brave enough to bring blankets and take to the ’yard for some recession-busting fun.

Next up: Neighbors Amoeba Records’ music-themed Monday movie night runs all of March and April with everything from Patti Smith: Dream of Life to Sleepwalking Through the Mekong already on the schedule.