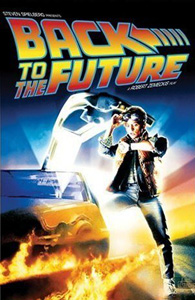 Howard the Duck, the big budget, George Lucas-produced adaptation of the anthropomorphic comic book character, finally makes it to DVD (available March 10). One of the most notorious flops in cinema, Howard has become something of a cult classic.

If Lucas is embarrassed enough to bury one of his films, you know it’s bad. If you’ve ever wondered what giant naked duck breasts look like, you’re in luck.

One of the biggest successes of the ’80s, the Back to the Future trilogy is now available in individual special editions for those heretics that don’t already own the box set.

“The Pink Panther” is surely one of the strangest spin-offs in TV – creating a cartoon character from a credit sequence that had nothing to do with the actual movie. Throw in an infectious theme song, and you’ve got pure gold.

Of the many collections available, The Pink Panther and Friends Classic Cartoon Collection is the volume to get for the casual fan. It also includes the complete series of “The Ant & The Aardvark” and a couple volumes of “The Inspector.”

Dead Like Me: The Complete Collection contains both seasons of the popular Showtime series as well as Life After Death. The much-loved black comedy follows a college dropout who, after dying, finds herself with a new job: Grim Reaper.

Robert Vaughn and David McCallum reunited in 1983 for The Return of the Man From U.N.C.L.E. (available March 3), a TV movie based on the hit ’60s spy series. By this time Leo G. Carroll had died. Plus, anything spy related just isn’t the same outside of the 1960s. But for fans it’s worth a watch.

The Moon and the Stars and Paid