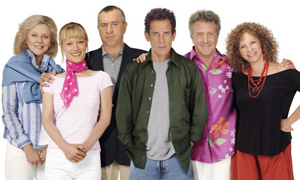 A third installment into the Fockers franchise is coming. Ben Stiller and Robert De Niro are going to do Little Fockers, a continuation of the story from Meet the Parents and its sequel, Meet the Fockers. I suppose right now I’m hearing the sound of inevitability that Agent Smith is so fond of.

Meet the Parents was great, and Meet the Fockers was definitely a worthy sequel, so I suppose this was a no-brainer. I have a big De Niro bias, and I go see anything he does if only to see him smirk at people.

I recently listened to an interview writer/director Eli Roth did when he was promoting Hostel: Part II, and he said something I really connected with. When asked if he would do a third Hostel film, he said that the third chapter in most trilogies are generally not good. Unfortunately, Roth is very right.

Assuming it isn’t being made to shamelessly capitalize on a film that worked, a sequel should either be better than its predecessor, or take the story in such a new and original direction that the two films can’t be compared. Something at the climax of the film should drastically change the course of events so that if the story were to continue, it couldn’t be a rehashing of the previous story for the purpose of simply re-shooting the same movie and slapping the number two on the end of the title. Creating a sequel that is better or just as good as the first one is a very difficult task; so creating an effective third chapter is even harder, and there are very few instances in film history where the third entry of a trilogy was considered one of the best.

I don’t want to name names, but I’ll bet that everyone can name at least five trilogies where they thought the third film sucked ass. I agree with Roth in that if you make a sequel that tops its predecessor, move on. But I also think that if your story is really, really strong and you’ve managed to set up a third film in an exciting way, do it.

This next bit is not really new, more like an addendum to something older. A while back I commented on the long gestating Robin Hood project that Ridley Scott was going to direct starring Russell Crowe. The film was to be titled Nottingham, Crowe was to play the Sheriff of Nottingham and the story was going to be told from his perspective with Robin Hood as more of a criminal mastermind.

Telling old stories from different perspectives is always a great way to breathe life back into them, and from the first time I heard about this project I was really excited. However, now there’s talk that they’re ditching that approach and just making a regular Robin Hood movie.

When I heard this I have to admit I was disappointed. I love Scott. He’s made a lot of my favorite films and he’s one of my biggest influences, but personally I don’t really want to see him make another version of a story that’s been done countless times in film and TV.

I trust Scott to make good movies and I trust his judgment, but I can’t help but think that telling the story from the Sheriff’s point of view would be … well …  something we haven’t seen before. How crazy would it be if Robin Hood turned out to be a scumbag who only gave to the poor to serve some sort of ulterior motive? Something sinister.

Hell, if Ridley Scott doesn’t do it, I guess I’ll have to.