(The Weinstein Company)
By Sasha Perl-Raver 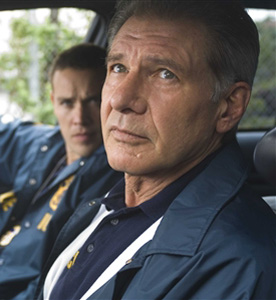 Harrison Ford plays as an ICE officer in Crossing Over.
(Credit: The Weinstein Company)

What Crossing Over wants to be is Crash.

What Crossing Over is, is a long, laborious, droning headache.

The film follows multiple storylines across Los Angeles, all dealing with issues of American citizenship, nationalization, patriotism and homeland security. But the thing that makes Crash both blistering and poignant is the way it shows how worlds collide and lives are changed.

Crossing Over might as well be called “A Bunch of Scenes About Immigration Where Sucky Things Happen.” There’s no thru line and, thus, no tether or anchor for the audience to latch on to.

The cast is packed with capable, captivating actors like Harrison Ford as an Immigration and Customs Enforcement (ICE) officer and Ashley Judd as an immigration defense attorney, but writer-director Wayne Kramer hangs them out to dry. Everyone on screen, from Ray Liotta to Summer Bishil, who was so dazzlingly talented in last year’s Towelhead, over-acts, over-emotes and under-impresses.