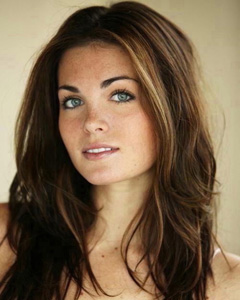 The L words lucky, lively and learning best describe Kate French from the hot Showtime original series, “The L Word.” Lucky enough to audition and get the part of Niki, the show’s wild, young party girl who doesn’t always make the right decisions in life and love, French is enjoying the Hollywood life, both its successes and challenges.

Originally from New York, French moved to California for college, attending UCSB, hoping to write a novel or life story (her favorite authors are John Steinbeck, Pat Conroy and Wally Lamb) – but then decided to pursue acting, her other passion, when an opportunity arose to star in the American telenovela, “Wicked Wicked Games.”

This was French’s first project and entailed 18-hour days, 6 days a week.

She recalls, “It was sort of like an acting boot camp!”

Now in its final season, “The L Word” has been a great run for French.

Reflecting on the creative team of writers, she states, “They keep it so interesting and fresh. They aren’t real sticklers to the dialogue, so I’m free at times for spontaneous improv.”

French will next appear in some episodes of “Gossip Girl” and the recently released feature film Fired Up!, as the head cheerleader captain who seduces one of the guys.

Constantly perfecting her craft by taking acting classes, immersing herself with high-caliber actors on set and giving herself regular confidence-boosting pep talks, Kate French stays motivated and enthusiastic in show business, and is living, loving, laughing and learning.