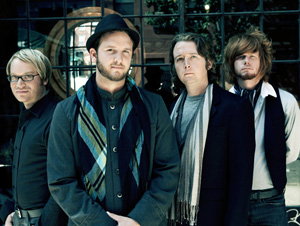 The just-released new album from the Alternate Routes is called A Sucker’s Dream, but that doesn’t mean that the roots rockers (routes rockers?) spend the album moaning. Actually the recurring themes of A Sucker’s Dream are hopeful, and guitarist Eric Donnelly explains where the title came from.

“Every night we push ourselves to take our show to a new level,” says Donnelly. That’s what keeps us going – knowing that the next thing is gonna be the great thing – the next album, the next big gig. A sucker’s dream!”

After an eight year hiatus caused by bad blood between group members, Limp Bizkit has decided to get back together. The reformed Bizkit will feature all of the original members: Fred Durst, Wes Borland, Sam Rivers, John Otto and DJ Lethal.

Durst and Borland issued a joint statement saying, “We decided we were more disgusted and bored with the state of heavy popular music than we were with each other. Regardless of where our separate paths have taken us, we recognize there is a powerful and unique energy with this particular group of people we have not found anywhere else. This is why Limp Bizkit is back.”

First up for the band is a tour of Europe including eastern European nations like Russia, Ukraine and the Baltic countries. After that the band will hit the studio and begin work on a new album. Limp Bizkit has sold over 33 million albums worldwide so far.

Covered: A Revolution in Sound

As part of the 50th anniversary celebration of Warner Bros. Records, the label will release an eclectic compilation featuring current Warner artists performing cover versions of classic recordings associated with the label’s artists from the past half-century. Each of the contemporary artists got to pick the song they reinterpret for Covered: A Revolution in Sound, and there are some interesting choices.

The Flaming Lips chose Madonna’s “Borderline,” the Black Keys take on Captain Beefheart’s “Her Eyes are a Blue Million Miles” and comic actor Adam Sandler gives Neil Young’s “Like a Hurricane” a try. Other artists participating include Mastodon, Michelle Branch, James Otto, the Used, Avenged Sevenfold, Disturbed, Against Me!, Missy Higgins and Taking Back Sunday.

Release dates are a bit confusing; Amazon will have a two-week exclusive on both digital and CD formats beginning March 10 then the digital version will be released to other online service providers March 24. The CD version of Covered hits retail stores April 7.

The entire official Metallica discography – 163 tracks – is being released as a digital-only “box set” under the title The Complete Metallica. The set includes all nine of the band’s studio albums, the double live album S&M, the double album of covers Garage, Inc., the Some Kind of Monster EP, the Live from Live Earth EP and “I Disappear” from the Mission: Impossible II soundtrack. Topping it all off will be eight bonus live tracks including “One,” “Creeping Death,” “Battery” and “For Whom the Bell Tolls.”

This is a festive time for Metallica; they’ve just won two Grammy awards, they’re about to be inducted into the Rock and Roll Hall of Fame and Museum and they’re the stars of the upcoming Activision video game “Guitar Hero Metallica.” The Complete Metallica will be an iTunes exclusive beginning March 31 and drop at other digital retailers April 28.