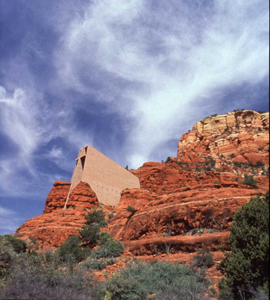 Chapel On Rock in Sedona
(Credit: Arizona Office of Tourism )

The beauty of Sedona is that the gorgeous scenery surrounds you on all sides, and it costs you nothing. A hotel in Sedona, however, is going to set you back anywhere from $100 up. Our hotel, the Sedona Real (95 Arroyo Drive) was $160/night for a suite, which included a free continental breakfast.

Sedona has sun 300 days a year and, having already been there in the summer when it can be a bit uncomfortable at 90 degrees, it’s best not to go during those months.

The highlight of our trip was the Pink Jeep Tour (pinkjeep.com), which I would highly recommend especially if you have never been off road. The Jeeps are long wheelbase Wranglers, which will hold at least six people and are driven up and down exceedingly narrow trails that wind around the base of some of the mesas.

The drivers have traversed these routes thousands of times and know just when it’s safe to “thrill” their tourist passengers by powering up a hill at a 45-degree angle. At least three times I was separated from the seat – at the same time as my hat separated from my head!

We also toured the art galleries, mostly in what’s called the Gallery District, along Highway 179. First we stopped by the large Exposure Gallery (561 AZ-Route 179), which had some great sculptures, and then checked out several in Tlaquepaque, an arts district that is designed to look like a Spanish village with art – both realistic and abstract.

You can eat most places in town for about $14 for an entrée. And the hiking trails abound – I’ve never been in a town that offers more beauty on the trail.

You really can’t mention Arizona without at least thinking of Indian silver and turquoise jewelry. We shopped in Oak Creek. The jewelry was spectacular, but so were the prices! Still, native jewelry makes great gifts – for yourself, too.