SIZE DOES MATTER: Clippers Falter Without Their Big Men 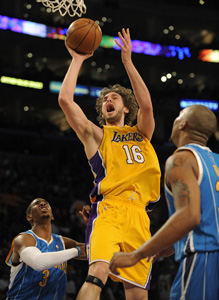 Forward Zach Randolph received a two-game suspension on the 17th for getting into a violent altercation with the Suns’ Louis Amundson late in the first quarter. Randolph was automatically ejected after pushing Amundson to the ground then hitting him in the face after he got to his feet.

Randolph’s suspension couldn’t come at a worse time for the team. With center Chris Kaman still out with a strained left arch, forward Brian Skinner suffering from a strained right Achilles and forward Marcus Camby unable to play due to an ear infection, the Clips are lacking most of their bigs.

Sunday, they suffered their third straight loss, in Portland against the 35-20 Trail Blazers. Guard Eric Gordon was the team’s point leader with 21 of their 87 total points against Portland’s 116.

On the other hand, the 46-10 LAKERS began the season’s second half with four wins.

They improved their home record to 25-4 Feb. 17 against the 32-23 Hawks, and a USC student from the crowd received a standing ovation after hitting the half-court shot to win $165,000 during the break before the fourth quarter. With Kobe Bryant putting up only 10 points, teamwork was the word of the night. Center Pau Gasol earned his third career triple-double (12 points, 13 rebounds and 10 assists), and forward Lamar Odom, who averaged 19 rebounds in the previous four games, scored 15 points and pulled down 20 rebounds on the way to the 96-83 win.

Center Chris Mihm was traded to Memphis for a future draft pick the next day, a move that added to Josh Powell’s playing time that night in Golden State (20-36). The former Warrior scored 16 points and seven rebounds in 25 minutes.

Although the Lakers trailed for most of the second and third quarters, they made a 17-3 run in the fourth, sparked by two 3-pointers by Trevor Ariza. Bryant scored 30 and Gasol added 24 points and 13 rebounds in the 129-121 victory.

One of the most exciting games of the season happened Friday night against New Orleans at Staples. The Hornets were the only team to not play an overtime game this season, until this match.

Both teams were shooting so-so from the field, with the exception of Lakers forward Luke Walton, who ended up going 5-7. It was Chris Paul’s offensive foul with 20.1 seconds left in the game that led up to Derek Fisher’s three-pointer with 14.6 seconds to take it into OT. Bryant scored 11 of his 39 points in overtime period, leading the squad to a 115-111 victory.

Sunday against the 18-37 Timberwolves in Minnesota, Bryant surpassed Elgin Baylor as the third top scorer in Lakers history and entered the top 20 in the NBA. The team came out with a 111-108 win, but it wasn’t a pretty one.

PLAYER OF THE WEEK: PAU GASOL

Count on the Spaniard to consistently be the ninja of games: stealing rebounds, dishing out assists and making baskets.