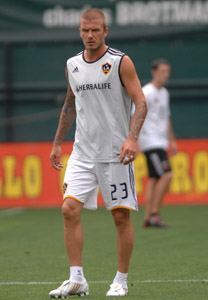 English soccer superstar David Beckham may leave Hollywood after all.

The Los Angeles Galaxy rejected the initial offer from AC Milan to acquire Beckham. Reports indicate that the offer was for more than $3 million.

However, Major League Soccer and the Galaxy had been seeking a transfer fee worth between $10 and $15 million from the Italian club.

MLS commissioner Don Garber imposed a deadline for AC Milan and Galaxy to reach an agreement after the Angelenos refused to accept the first offer. Nevertheless, AC Milan never made another effort to produce a higher offer in potentially acquiring Beckham.

AC Milan has made it clear that they only seek Beckham’s services until next season, and Beckham intends to somehow continue playing with the squad in Milan.

“I know it will be difficult to go back after everything that’s happened,” Beckham told the Los Angeles Times. “I’ve said I want to stay at Milan, and I haven’t changed my mind, but it’s out of my hands.

“I hope things will go the way I want them to, of course. But if I have to go back, I will be professional, because that’s what I have to do.”

AC Milan vice president Adriano Galliani seems to think that the club will complete the transfer because both squads have gone into deeper negotiations. Galliani was reported stating to the La Gazzetta dello Sport that the organization had taken steps forward in the matter.

Fortunately, the Galaxy expect striker Landon Donovan to return. It seems as if his current stint in Germany will only be temporary since Bayern Munich management have made it official in their plan to not offer a transfer fee for the American.