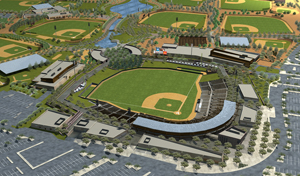 Listen up, Dodgers fans. It’s been a long winter. Maybe last season didn’t meet your highest and most precious hopes. Whatever, it’s time to move on. Springtime is right on deck. It’s time to look to the future.

This coming Sunday the Dodgers will be playing their first exhibition game at their new spring training facility at Camelback Ranch in Glendale, Ariz. If you’re a true blue Dodger fan, the best way to show your support is take a little road trip. That’s correct, I am proposing we all drive out to Arizona and give the boys some love.

Just the other day I was perusing the Dodgers Web site, and there was footage of catcher Russell Martin talking to the press. He is all positivity, looking forward to playing and winning, yada, yada, yada.

But then he says, “We’re only missing a few more fans.”

It nearly broke my heart. The poor guy puts it all on the line, getting banged and bruised up every year and coming back for more. It seems to me the least we could do is drive out to Glendale and give a holler.

From the pictures I’ve seen, the new training facilities look spectacular. Complete with 13 fields, walking trails, two ponds and a lake with fish (so I hear). The best part is that it’s free to stroll around the grounds – although you probably need a permit to fish. Tickets to the games are being sold for as low as eight dollars.

The exciting thing about this ball club is that they are virtually the same squad that ran away with the division last year. James Loney, Matt Kemp, Andre Ethier, Casey Blake and Juan Pierre are probably taking practice swings as you read this. Even Rafael Furcal is healthy and ready to start at shortstop.

While the lineup looks promising, the big question remains regarding the pitching staff. Supposedly Jason Schmidt is feeling good and ready to start. The acquisition of Randy Wolf could prove just the ticket. Personally, I have my heart set on a comeback for Jeff Weaver, who has as much passion as any pitcher in baseball.

I can’t think of a better way to pass spring break than to see them all up close in action. And for a mere seven-hour drive (with traffic), who can resist?