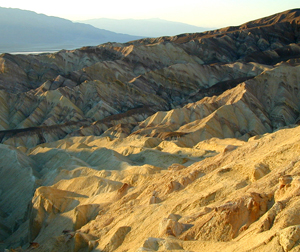 All of a sudden I found myself in a theme park. Neon signs and faux western billboards beckoned us to “Come on in!” to Furnace Creek Resort, and I couldn’t help but follow them.

After parking I walked up to a “you are here” sign. My jaw slackened as the desert that presumably was desolate housed a resort that included a fine dining restaurant, massage therapists, a poolside lounge, cocktail service and not one, but two, golf courses.

I felt cheated. A day earlier a friend and I had left for a destination we assumed was relatively untouched because it was perceived to be undesirable. The destination was Death Valley.

The assumption was that it would be dry and arid, desolate and stark, and empty. Instead we were greeted with busloads of bewildered Asian tourists and senior discounts in the 49er Café. Tired, we decided to camp in the Furnace Creek Resort and then leave disappointed the next day.

When we woke up the next morning everything had changed. The billowy, rain-filled clouds of the previous night had receded leaving stark, clean air and brightened blue sky.

The scope of the valley, which we had missed during our night drive, was incredible. The resort, which looked huge and garish draped in nighttime neon, now seemed like a mole on the vast landscape. After pouring over a map, the Golden Canyon trails sounded like a logical place to start.

For the next five days we hiked, backpacked and camped at all edges of the park. I expected to find an endless amount of dusty desert trails but was surprised by a diverse and unexpected landscape.

We explored Darwin Falls, a concealed waterfall in a wooded area, quickly ducked into numerous abandoned mines in the Golden Canyon, slid down sand dunes that seemed to belong in the Sahara, wandered around the crusty salt flats of Badwater and camped on any one of numerous dirt roads that lead to snow-capped mountain ranges that bracket the valley. If this description sounds like the place is some sort of fantastic naturalist theme park – it is.

It’s crucial to avoid getting suckered into the inevitable tourist traps though. We assumed any place given the title Hell’s Gate was worth exploring. It ended up being a paved road to a lookout that wasn’t nearly as impressive as it sounded. By the same token a recluse’s mansion, Scotty’s Castle, was equally unimpressive and reminded me of a mini-Hearst Castle clogged with tourists.

The beauty and allure of Death Valley is its simplicity. Miles of empty space and salt flats are punctuated by wind swept sand dunes and rocky hills. Days can be filled with long excursions of hiking craggy, shingly buttes, impressively low, sandy valleys (200-feet below sea level) and snow sprinkled mountains.

The weather, which averages 125 degrees in the summer (Badwater salt flats may reach 200 degrees), is accommodating and temperate during the winter months. The valley has the aura of a cooled stove – as if nature’s architecture was distorted and scarred during the brutal summer sun and warped into an unnatural position. This only added to the eerie, alien and exciting feel of the expansive country.