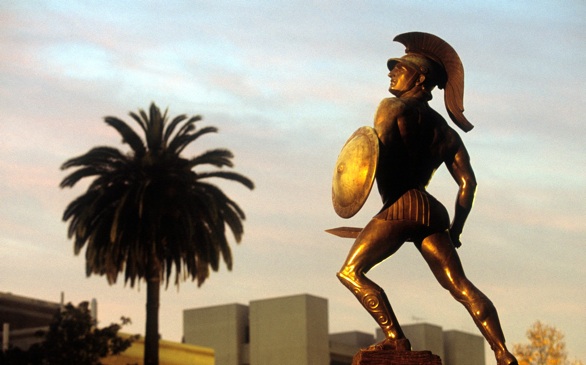 In light of the California state budget crisis, estimated conservatively at $42 billion and liberally at unremitting catastrophe, I have assembled a list of cutbacks that best serve the taxpayer. As seen in the deal struck last week in Sacramento, this kind of drastic fiscal belt-tightening is never easy, nor is the solution universally easy to stomach.

But I am confident that this great Golden State will rise up to prosperity and once again live out its squirrelly mandate as one of the world’s largest economies: shelling out tax breaks to Hollywood, bickering over social services for illegal immigrants and gaily cannibalizing earthquake and natural disaster funds while praying that the Big One happens on someone else’s watch. The good old days.

First, I would immediately raise the fine on tactile cell phoning and text messaging while driving to $1.2 million per offense. If you can’t keep your hands off the phone and on the wheel, you don’t deserve to retire. Ever.

This tax would also presumably cause a further decrease in traffic accidents, thereby easing the strain on emergency services that could be better utilized elsewhere.

However, as drivers pay more attention to the road, they will also be more inclined to notice the deplorable condition of the roadways and demand action. Any budget surplus generated by this tax would be quickly eaten up by infrastructure repairs, always desperately needed but now glaringly obvious to drivers who find themselves with little to do but stare at the road.

Second, annex Nevada. The favorable balance of this small population and large gambling revenue will be a boon to our depleted coffers.

Naysayers who point to the supposed “illegality” of this action would be well served to remember that the largest single landowner in Nevada, controlling 86 percent of the total area, is the federal government, which, if you’ve been paying attention to the news, is a little busy dealing with a global economic meltdown. I doubt they are going to notice a few million square miles of desert.

More importantly, in those few million miles of square desert lie Area 51 and a vast treasure trove of alien technology ranging from talking microwaves that never burn their contents to spinal disassociator rays that always burn their targets. These products could be packaged and sold to the Japanese, who are obsessed with weird gadgets and electronic thingys.

Of course, this plan is somewhat problematic because the aliens no doubt stole all of this technology from Japan years ago. They know quality when they see it.

We will have to put the L.A. public relations behemoth to work re-branding all of these items for resale. Image makeovers aren’t cheap, so again, we’ll be lucky to break even.

Third, any voters who supported Proposition 8 must pay, in the future and retroactively, sextuple the marriage license fees. Since marriage is such a sacred covenant that can’t be freely shared, those lucky enough to have it won’t mind paying a bit extra for the privilege.

The cost will be sextupled because it has the word “sex” in it, reminding all the new taxees that “sex” is only found in marriage for reproduction. Unless, of course, “sex” features as the prefix of a numerical value between fivefold and sevenfold or an instrument used by ship captains to determine longitudes and latitudes.

Since gay Californians have been paying taxes without equal representation under the law for years, however, they may subconsciously be unable to resist paying this fee as well. Accustomed to having to prove themselves to fellow Californians, same-sexers may actually take up the collective effort to pay more than the required amount.

Coupled with the destruction of the female tuxedo industry and the loss of hotel and restaurant revenue in San Francisco for all of the Fox News media crews no longer staking out the steps of San Fran City Hall to grab some video of two married men kissing to beam back to GOP fundraisers across the country, any tax revenue generated here must be considered a wash.

I suppose, then, the only viable solution demands that Governor Schwarzenegger return to moviestardom immediately, not in abdication of his title but in addition to it. Many people are working two jobs to make ends meet, and I think it only right and fitting that Arnold suit up and churn out a few flicks on the weekends.

These films, helmed pro-bono by each and every living Oscar-winning director and scripted by each and every living Pulitzer Prize and PEN/Faulkner-winning writer (thrown in with the deal for Nevada), will be fast-tracked for release to every international market in the world under the title, “The Plans for Immediate, Lasting and Awesome Economic Recovery in Six Easy Steps.”

The star governor’s muddled but sincere delivery will convince all patrons that the money they spent at the cinema was well worth it and that there is light, however fabricated, at the lip of the horizon. Markets will rebound, banks will lend and California will have its first multi-trillion-dollar movie franchise. The first rule of economics is: It’s all about confidence.