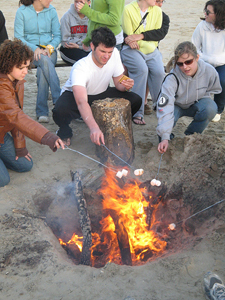 It’s that time of year again – time to start planning those oh so coveted spring break trips. Don’t want to do the Cabo thing (or don’t have the money)? Why not do something positive, different and ultimately more fulfilling, and try an alternative spring break volunteering program?

Your campus probably has their own programs, or United Way nationally sponsors programs in Detroit, Indiana and the Louisiana and Mississippi Gulf Coasts. It only costs $150 to participate, and you would either be helping out non-profit organizations, helping to repair homes destroyed by flooding or assisting in communities that were devastated by Hurricane Katrina.

Applications are reviewed and accepted on a rolling basis, so apply as soon as possible at liveunited.org/asb/. For more ideas, see Fun for Less on page 7.

Art Talk: The Academy, the Arts & the Community

Feb. 26 at Loyola Marymount University the Laband Art Gallery and the Truth About the Fact: International Journal of Literary Nonfiction are hosting an evening of art, discourse, music and poetry. The program states: “In an era when the intelligencia and the arts often get a bad rap for being separated from the greater community, this program will explore how and where they intersect.”

This will be accomplished through discussions, poetry and free fried chicken and drinks! The event takes place at the Laband Gallery on LMU’s campus.

Father G and the Homeboys

The Chicano Studies Research Center at UCLA presents a free screening of Father G and the Homeboys, a 2007 documentary narrated by Martin Sheen about a Jesuit priest who attempts to clean up the acts of four Boyle Heights gang-bangers. Father Greg, affectionately called “Father G” by the gang members, and his non-profit group “Homeboy Industries” help kids who are exposed to gang violence to prepare for a better and more positive future. Check it out for free from 4 p.m.-6 p.m. in the Young Research Library presentation room Feb. 25.

How MySpace Became a Household Name

March 3 at USC, CTO and co-founder of MySpace, Aber Whitcomb, will discuss how it went from zero to 125 million registered users in just three years and was ranked the most trafficked site by comScore. He will specifically talk about the technology behind a high-traffic Web site like MySpace, and what it takes to keep the site running.

Whitcomb oversees the engineering and technical operations at MySpace and is recognized as an expert in large-scale computing, networking and storage on the Web. He will also be co-teaching a course on developing social apps this fall at USC’s Viterbi School of Engineering.

In 2006, researchers found 16 Ice Age fossil deposits under a parking lot next to the tar pits. Among them are a near-intact mammoth skeleton and bones of saber-toothed cats, dire wolves, bisons, horses, ground sloths and other mammals. The Page Museum’s Ice Age collection could double with the addition of these discoveries.