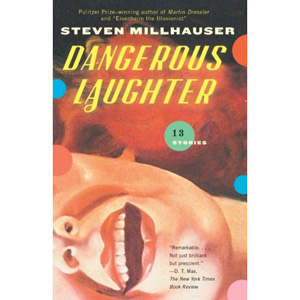 As in his Pulitzer Prize-winning novel Martin Dressler, the 13 stories in Steven Millhauser’s new collection show the fantastic possibilities of the real world. It’s a landscape populated with obsessive dreamers, which Millhauser captures in brilliant, masterful prose. He creates worlds the Germans would describe as unheimlich – the Normal that is somehow slightly off and unsettling.

The book is divided into three sections: Vanishing Acts, Impossible Architectures and Heretical Histories. After a bumpy start, opening with an extended riff on “Tom and Jerry” cartoons that never quite goes anywhere, Millhauser doesn’t look back.

In “The Disappearance of Elaine Coleman,” the narrator tries to grasp snatches of memories of a girl he went to high school with who has mysteriously vanished – apparently from being ignored for so long. “History of a Disturbance” is about a man who begins to dissociate words from the world around him. “A Precursor of the Cinema” is a tour de force, in which a late 19th Century artist (and possible magician) becomes consumed with the possibility of moving paintings.

While a few of the stories are not as fully realized as others, there are so many imaginative and vividly memorable ones that it doesn’t matter much. It’s also a highly cohesive, thematically bound collection.