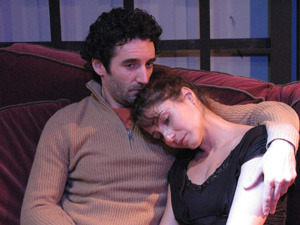 When a lonely dancer, Anna (Marisa Petroro), loses her gay best friend, Robbie, in a boating accident, she strikes up an unlikely ‘friendship’ with his hyperactive, coke-snorting brother, Pale (Dominic Comperatore), in Lanford Wilson’s clever pas de quatre, “Burn This.”

Anna is floundering in her life without Robbie. She has her roommate, Larry (Aaron Misakian), and her longtime boyfriend, Burton (Jonathan Blandino), to console her, but things heat up when she meets Pale. The two begin a dangerous liaison.

Not only is Anna cheating on Burton, she soon discovers that Pale is married with two children. She must decide between the dependable boyfriend and the volatile lover.

Wilson’s drama is witty and engaging, full of sub-textual grist. John Ruskin moves the actors around fluidly under his taut direction. It’s a spectacular production.