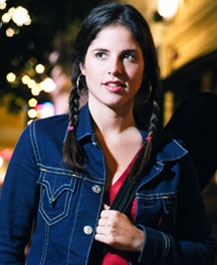 Somewhere between New Jersey and Philadelphia, Kat Parsons is stuck in traffic. She has just finished singing her heart out and will be on the road all night until her next stop – one of many she’ll be making in the next few months. And even though she admits the previous night’s show was much better than tonight’s, judging from the tone in her voice, she’s still on that natural high from being on stage.

“My joy lies in live performance,” she says with conviction. Lucky for her, performing is where this Los Angeles-based singer-songwriter has always thrived most. In fact, it runs in her blood. Parsons was born in Vienna, Austria, to a family that practically breeds musicians. Her father is a successful opera singer, her mother is a musician and songwriter, her brother plays in her band and her grandfather plays a saw with a violin bow.

“My whole family is naturally inclined [toward music], so doing music is something that just came naturally to me,” says Parsons.

Those who have seen her perform and have heard her music will agree that Parsons is indeed a natural – a natural singer, songwriter and performer.

Having been raised on music since birth, it was almost destiny for Parsons to follow that route herself. She began performing by doing theater, but realized she enjoyed the creativity and originality of making her own music much more.

“I have always loved to perform and I started out doing theater but I always felt more comfortable being authentic,” she says.

It was “being authentic” that helped Parsons become the first place finalist at the 2003 Acoustic Live local band competition and the Grand Prize winner at the Acoustic Live competition the following year. She was also the runner-up for Album of the Year at the 2005 DIY Music Festival.

Since graduating from Northwestern University with a degree in theater, Parsons has focused all her energy on her musical career. She moved to Los Angeles where she has had the opportunity to work with some great, successful musicians.

“Despite what people say about trying to make it in L.A., all of the musicians here are really supportive of one another,” she says. It’s the support that she’s received from other musicians, critics and – most importantly – her fans, that has really helped her flourish.

In 1999, Parsons released her debut album Framing Caroline (Waterdog Music), which she recorded in two short days. Eager for more, her fans pushed for her to make a follow-up. In return, she asked her fans to put their money where their mouths were, and set up a pre-ordering system where fans sent her nearly $18,000 before she had even recorded a single word.

“I was amazed by the support of my fans; I feel as though they are a big part of the album,” she says. “My fans really stepped up. It was really encouraging, and I’m happy that it worked out the way that it did. Because of this, I was able to make the record that I have always envisioned making.”

The resulting album, No Will Power, is honest and heartfelt to the core.

As Parsons puts it, No Will Power is the “unraveling of a romantic relationship, not necessarily in chronological order. It’s about being in a relationship and missing that person even though they are physically present, and not wanting to be present at the same time.”

Parsons admits that writing the album not only helped her voice, but also to reveal her feelings at the time that the album was recorded.

“When you’re in a relationship, you don’t always have the freedom to say everything, and it’s scary to admit feelings to that person. But through music, it’s freeing and helps to get to the bottom of things,” she says.

Having never been a shy person, Parsons says that writing music both personal and meaningful has always been easy for her.

“It’s writing a good song that is hard,” she says with a chuckle.

As Parsons continues to grow creatively and musically, she hopes that those who listen to her music will be touched on an emotional level.

“The main thing that I want to do with my music is to be able to connect with people on an intimate basis,” she says. “After all, the beauty of music is being able to relate to it."

No Will Power is currently available. Kat Parsons will be performing with a full band for her CD release party on April 10 at Hotel Café in Los Angeles. For more information, visit www.katparsons.com.