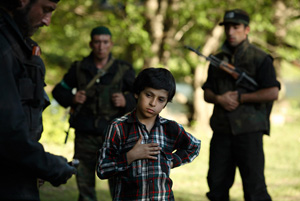 First, there was 12 Angry Men. Then there was MTV’s take called “12 Angry Viewers.” Now, the tale of a dozen very individual jurors gets its newest makeover in the movie, 12. This iteration of the story is set in modern-day Russia. A young Chechen man (played by Apti Magamaev) stands accused of a violent crime and sits in a prison awaiting his fate. The suspect was orphaned during the Russian conflict with Chechnya — no one knows the extent of the horrible and ugly things he’s seen.

His future is being decided by an engineer, a foreman, a cab driver, an elderly Jewish man, a transit worker, a television producer, a surgeon and a traveling actor, to name a few. As the men sit down to confer and deliberate, each is convinced of the suspect’s guilt — except for one lone juror. That man digs in his heels and sticks to his convictions. He re-enacts key points in testimony that would appear to implicate the suspect and, in the process, manages to poke some rather large holes in the prosecution’s case.

This story was first brought to the big screen in the U.S. by the incomparable director, Sidney Lumet. 12, however, is the passion project of director Nikita Mikhalkov. He steers the action on a clear and captivating course into the human psyche. Still, there are some minor drawbacks to the film. There is a tendency for audiences to dislike foreign cinema because of the length of time it takes some directors to tell their stories. Normally, if a movie is good, the total run time shouldn’t be an issue. However, it is in 12. The latter half of the movie is nothing but a never ending series of loud and violent flashbacks that do very little to further the action and serve as nothing more than a swift shot of adrenaline into a movie that really doesn’t need one. There is also a lot of dancing and prancing done by the prisoner as he waits for his judgment. I don’t know that I’d be “pulling a Timberlake” in the clink if my future was up in the air.

Regardless, the end result is a powerful film filled with overwhelming humanity and excellent performances from a slew of unlikely superstars.