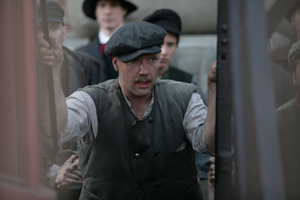 Subtitles really aren’t that bad. The words flit across the bottom of the screen and, sure, it’s preferable if I didn’t have to read during a movie, but often the sound of a foreign tongue adds something (mysterious and unproven) to my trip to the theater.

We, as an American public, are not regularly exposed to films that ignore Hollywood’s postmodern ambition: cheap thrills and an even cheaper cinematic experience. Sure, we have our favorite “little” independent movies, but as a whole, the American audience is not as interested in quality foreign movie magic.

Hopefully, this piece from Sweden will be an exception.

Everlasting Moments tells the tale of Maria Larsson, a housewife imprisoned by her duties as a mother and by the infidelity and alcoholism of her lousy, abusive husband. When Maria finds a camera she won in a lottery years before, she begins documenting the moments and people in her life.

With the help of local photographer Sebastian Pedersen, the working class mother transcends her poverty and unhappiness by transforming her kitchen into a dark room and her life into a photo album. Maria is not overly invested with the revolutionary contraption, but rather her impressive capacity to incorporate the new with the old allows her to live each day in splendid realization. Her gift for seeing the majestic in everyday life is translated onto the pictures she takes. A tabby cat, her children playing, potted plants – her muse is life’s vibrant ordinariness that is immortalized by her work.

Winner of six Guldbagge Awards (Sweden’s Academy Awards) and nominated for Best Foreign Language Film at the Golden Globes in 2009, Everlasting Moments will finally be available to mainstream American audiences. As simple as it is beautiful, the film does not seek to make an overreaching statement about progressivism or feminism, but clearly comments on the need for appreciation of life’s intricate gestures.

The master craftsmanship of director Jan Troell guides an assiduous view of the bourgeoning plight of families at the turn of the 20th century. As a filmmaker, Troell seamlessly develops an enthralling picture and garners brave performances from his actors.

The film is heavily invested in realism, though it addresses the escapes and deviations that create the moments you remember forever. It is a small accomplishment for Sweden, one that resonates with an audience … despite the subtitles.